Football (also known as soccer to all the Americans) is the world’s most popular sport. In Bremen you will find one of the most successful German Football Teams – SV Werder Bremen. Every Sunday, after the latest home-match, a selection of celebrities, club players, sports presenters and fans get together in a local TV Studio to analyse and discuss the team’s performance. This discussion is broadcast in a show called “Mittelkreis – der Werder Bremen Talk”. The opening credits of the show feature a pan across the Bremen skyline followed by a zoom-in on the live studio audience and presenters. This opening credit pan and zoom image is captured live every week by a remote camera and transmitted over 800 meters of fiber cable to a mixing board in the TV Studio. New Content Media is the TV production company that makes all this happen.

During a studio upgrade, Gerd Lankenau, Studio Manager at New Content Media, discovered that a newly installed mixing desk was not compatible with the Fiber network, and instead had Serial RS422 interfaces. This threatened to disrupt the live opening sequence of the Mittelkreis show. 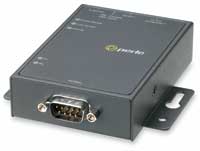 “I contacted Panasonic and they advised me that I would require a Serial to Ethernet converter in order to install the new mixing desk with its RS422 interface,” says Mr. Lankenau. “Through an internet search I made contact with Perle and was hopeful that they could provide a solution to this problem.”

Perle explained that creating a serial tunnel over Fiber would provide a quick, reliable and cost effective solution. By connecting an IOLAN DS1 Device Server to the mixing board and using copper to fiber Media Converters, New Content Media would be able to control the remote camera via an RS422 serial tunnel.

This solution ensures seamless communication between the new mixing board and the remote camera with only a slightly modification to the network architecture.

Find out more about Serial Tunneling.