For any community, a state-of-the-art 911 emergency system is a necessity. It is especially critical to ensure that all services and applications are up to speed with the latest technologies.

In 2005, the Sheriff ’s office in a large USA city went live with a new upgraded emergency response system to meet escalating technology demands. For example, the system needed the ability to track calls from cellular phones, among other technology innovations, that have evolved since the last upgrade several years ago. In addition, the 911 system needed to allow for crucial advanced on-screen mapping in order to speed dispatch processes for emergency teams.

The previous system at the 911 center had multiple desktop terminals and the 911 feed connected to the network through a 50-port terminal server. With all of the data running through the terminal server, this system was slow and cumbersome. The 2005 upgrade allowed the 911 center to replace the desktop terminals with PCs with internal NICs (network interface cards). This provided direct connectivity to the network using CAT6 cabling. While this improved network efficiency, one challenge remained: the Oracle Database Manager needed to get the 911 information sent to his back office server for storage without incurring the cost of replacing the 911 Feed equipment.

“When someone calls 911, their information is displayed on a dispatch monitor and used for rapid response deployment. This vital caller information must also be collected in our database. That simply wasn’t happening quickly enough for my needs.” the Oracle Database Manager for the city explains.

He chose Perle’s IOLAN DS1 Device Server to provide the serial to Ethernet connectivity between the 911 feed and the network. “It was completely plug and play. I was able to configure it with no problems. It was all very easy.”

With the addition of the Perle IOLAN Device Server, this city’s emergency system upgrade was successfully completed. In fact, the database manager has been so pleased with the functionality and flexibility of the IOLAN DS1 he purchased a second unit, which has already been configured for deployment as a back up. 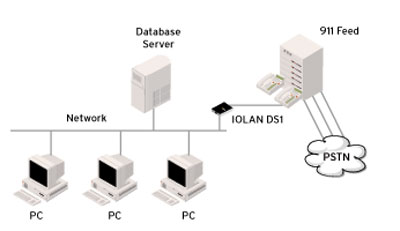