Perle had already proven themselves to me as being able to handle our rough environment, so they were the first place I looked when I needed Fiber to Ethernet

If you travel to Alaska’s interior, 38 miles northwest of Delta Junction and 85 miles southeast of Fairbanks, you will find the Pogo Mine, where gold is safely produced 365 days a year. Given the remote and logistically challenging environment, employees work at the camp for multi-day shifts before returning home. This means that the mine must operate like a small town and provide accommodation, medical care, food, and more for 450 people living and working on-site.

Mike Spooner, Telecom and Infrastructure Technician for Sumitomo Metals Mining Pogo LLC, joined the team in 2009. By that time, the rest of the world had far surpassed Pogo’s existing network infrastructure. 300+ people shared seven T1 lines that made up the "morale network" enabling everyone to have internet in their rooms to check email, read the news and call home. Everything ran over Carrier Class microwave equipment from the mine, over "40mi mountaintop" (located at mile-marker 40 on the 50-mile access road), to a telco tower in Delta Junction.

By 2011 they had upgraded to a pair of 20mb Ethernet Circuits and a pair of T1’s. It wasn’t too bad. People could Facebook and Myspace, and all that jazz but, multimedia content still took some time to load. Since spending $6.6 Million on a fiber line to Delta Junction was clearly cost-prohibitive, they plodded along with what they had until 2017. 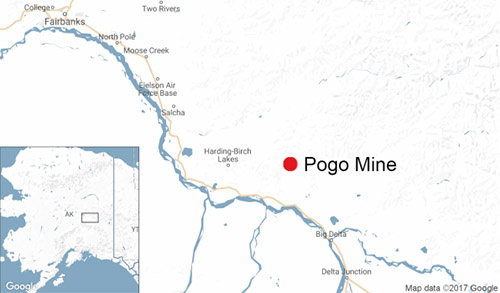 Spooner explains, "In early 2017, it came to my attention that a local WISP had their own telco tower in Delta Junction, with a direct fiber connection to two ISPs. This was a breakthrough. After a substantial amount of research, we figured out we could install a 11ghz link from Delta Junction to 40Mi, and a 5.8ghz link from 40mi back to the mine for less than one month’s cost of our current internet bill."

Spooner continues, "As the design came together, we realized that the 11ghz microwave had to be on one side of the mountain and the 5.8ghz had to be on the other side, about 100ft apart. Since it is the highest mountaintop around and trying to achieve ‘ground’ on solid rock is very problematic, we decided that eliminating the electrical route between the two systems was the best way to go. Perle had already proven themselves to me as being able to handle our rough environment, so they were the first place I looked when I needed Fiber to Ethernet."

The installation consisted of a Dragonwave Licensed spectrum radio link on one side, reaching from 40mi into the Delta Junction ISP tower. From the other-side of the mountaintop a UBNT AF-5X-Quad reaching the last 6 miles to the Pogo Mine site. Due to lightning risk, Spooner opted to heavily ground both structures, install double lightning isolation on the power leads and run optical fiber for the four Gigabit links needed by the Dragonwave radio. It provides two SFP outputs and two copper ports natively. The Perle SFP Media Converters were used to "create" the other 2 fiber outputs.

Spooner concludes, "Everything seems to be working just grand, even during all the torture mother-nature throws at us. The Perle Media Converters haven’t dropped a single frame or packet since they were turned on, even in -20°F temperatures and over 12 inches of radial ice!" 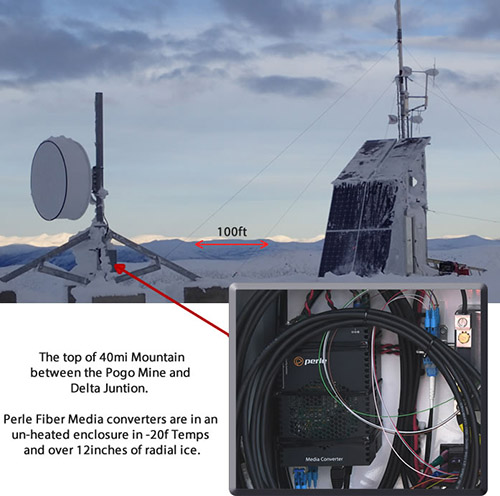 Pogo is owned and operated by Sumitomo Metal Mining Pogo LLC, a joint venture between Sumitomo Metal Mining Co., Ltd (SMM) and Sumitomo Corporation. SMM’s corporate mission is to support shareholders, clients, local communities, employees and everyone else around the world in their endeavours to achieve economic and spiritual prosperity and realize their dreams through our sound business activities. SMM owns 85% of Pogo Mine while Sumitomo Corporation owns 15%.