For one global auto parts retailer, converting 6,300 of its outlets to a LAN-based POS environment was a job that they knew would take years to complete. To ease the transition, technology provider Arrow OEM Computing Solutions (OCS) found that Perle's Terminal Server technology was just the ticket for bringing thousands of pieces of existing serial equipment online – without the need for immediate replacement.

Arrow OEM Computing Solutions (OCS), a division of Arrow Electronics (www.arrow.com) and a leading supplier of POS parts and systems, had a significant conversion project on its hands. The customer, a major auto parts retailer, was planning to convert its more than 6,300 retail outlet POS systems worldwide to a LANbased infrastructure.

As the LAN conversion progressed, Arrow needed to find a way to cost-effectively manage equipment replacement to accommodate the new networks. Since the stores had been using stand-alone systems for decades, each site had a number of serial-based devices – many of which were relatively new and still highly functional. 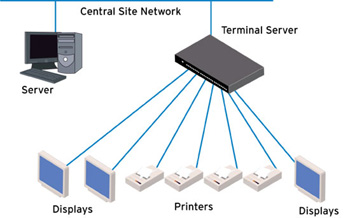 Ron Charron, Account Manager for Arrow explains that when the LAN implementation started, “Given the size of the project, we allowed 7 to 8 years for the transition, including equipment. But there were close to 90,000 serial devices out there - including printers, scanners, workstations and cash registers - so we didn’t want to swap out equipment for network connected devices overnight, because of the expense. Besides, much of that equipment was pretty new. We needed to find a way to connect these devices to the LAN until they had reached the end of their useful life.”

He adds that at the outset of the project, serial boards were used at some locations for networking serial equipment, “It didn’t do anything about the cabling problem. Since each device needed to run a cable from the server to the store system, there was an average of 18 cables being run per store. Some larger operations had up to 48 cables.”

“Perle’s Terminal Server allowed us to connect devices to the LAN at each location in a serial fashion,” he explains. “In that way we could shorten the number of cable runs at each site and concentrate them through one or two terminal servers, depending on the size of the store and the number of serial devices. This also allowed us to enjoy the high performance of a LAN network port connection without having to swap out perfectly good equipment. And configuration could be done easily since the drivers were in the operating system.”

A solution that delivers results

Installation at each site typically takes a day. “We just put the Perle product in, connect the cables and we’re ready to go,” says Charron. Arrow has been installing 1200 to 1500 Perle Terminal Servers a year, and on completion of the project will have installed more than 6000 servers.

Charron reports that not only have the Perle Terminal Servers helped to extend the life of the equipment as the stores transition to a LAN, they have managed to reduce cabling requirements by up to 60% on average.

“I’d guess that overall, using Perle’s Terminal Servers, we’ve bought up to seven or eight years of extra equipment life, depending on when it was installed,” he says. “This was a huge project, and having the Perle technology in hand has helped us manage it all much more efficiently and cost-effectively.”