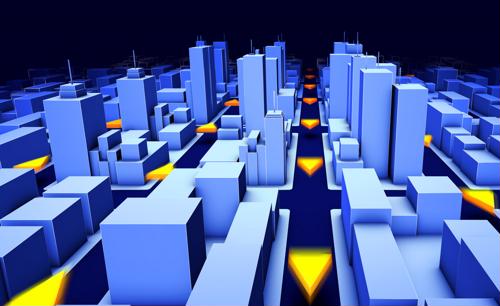 The smart city is a rising vision for municipal governments. The promise is fairly straightforward - a connected digital ecosystem across cities will allow government bodies to coordinate municipal services and utilities in new ways. For example, if roads are congested in a detour because of an accident, city officials can adjust the timing of traffic lights to reflect the unexpected influx of cars on the road, allowing for smoother transit. All of this can be done in real time as traffic monitoring apps notify the city of the problem and traffic lights are connected to a network. What's more, municipal governments can eventually have these machines automatically make these adjustments as they figure out the nuances of the system over time.

This vision is so simple and logical that it may seem like one of those "too good to be true" ideas. It isn't. However, the smart city won't be easy to achieve either. The reality is that it requires a huge change in how municipal governments operate. These entities are typically conservative about technology as they must maintain secure, reliable infrastructure on tight budgets - not exactly a recipe for innovation. That said, many governments see the potential cost savings and quality of life benefits of the smart city. At the same time, innovations like smart grid technologies and Internet of Things projects are allowing for piecemeal smart city efforts that drive incremental gains. These factors are coming together to create exciting potential for smart cities in coming years.

Underneath all of these changes to how cities operate lies a huge need to upgrade networks. Communications systems underpin every aspect of the smart city, and municipal governments must consider these three network issues when they make smart city plans:

1. Backhaul networks
Wireless networking is going to play an instrumental role in smart cities. You aren't realistically going to be able to run cables out to sensors, monitoring devices and similar solutions spread throughout your city. You will need to offer high-performance, secure Wi-Fi connectivity to these systems. Public Wi-Fi networks can also help if you want residents to interact with some city systems to add visibility into what is happening in your municipality. Wireless networks don't happen without adequate backhaul networks in place.

Beyond wireless systems, you also need to create backhaul lines that you can use as a middle-mile network within your smart city ecosystem. High-bandwidth links between different parts of your city can serve as conduits for shorter cable runs to traffic lights, municipal buildings, surveillance cameras and similar assets.

Fiber-optic cabling is ideal for these backhaul runs. The cables can handle the long distance needed for such systems and provide large amounts of bandwidth to move data from diverse systems. Implementing large-scale fiber networks will require strategic media converter use to provide fiber-to-Ethernet interconnection at endpoint sites.

2. Hardiness
Imagine trying to put every cable, switch, router, connecter and similar network device in a controlled environment. You'd be building small enclosures throughout the entire city, and each one would require its own power source, cooling and heating unit. This would be entirely too much to manage, as it is not only unrealistic to afford and deploy these systems, but you'd also need to worry about maintaining all of the hardware. Instead, secure enclosures that do not provide environmental control, but do protect against tampering, are more attainable for your network enclosures.

"Every component of a smart system is going to need energy."

This situation creates an operational climate in which your network infrastructure must be able to withstand vibrations, extreme temperatures and other conditions that are adverse to stable data transit. Industrial Ethernet switches and similar ruggedized hardware play an instrumental role in enabling network equipment to withstand the conditions that develop when components are stored outdoors or in other environments where harsh conditions are present.

3. Power
Every component of a smart system is going to need energy, and you don't want to have to run power cables out alongside network wiring. There may be some sensors and similar small devices that use passive power methods, like built-in solar panels or similar tools that provide power without a connection to a traditional energy system. However, plenty of hardware will need a more direct power link, adding a layer of complexity to your smart city efforts.

Power-over-Ethernet technologies resolve many of these issues. Having PoE functionality built into industrial Ethernet systems allows you to get energy out to systems like surveillance cameras that need a network connection. Offering basic power to these endpoints dramatically simplifies the infrastructure deployment that comes with a smart city deployment, resulting in reduced costs, easier maintenance and less complexity for moves, additions and changes over time.

"Getting municipal networks up to speed is a critical."

Making the smart city a reality
Getting municipal networks up to speed is a critical first step in making the smart city vision something that government organizations can actually achieve. This begins with forward-thinking hardware strategies. You can't deploy just enough network systems to meet capacity demands, for example, or you'll end up needing to build out more infrastructure every few years, leading to disruptive and expensive construction throughout the city.

Thinking ahead and deploying network components that deliver future-proof functionality, flexibility and resiliency to withstand environmental conditions will not only support ongoing smart city development, but provide the reliability you need to minimize maintenance expenses over the life of your systems. Realizing the smart city dream is going to take a great deal of work, and much of the effort needs to happen within the network.