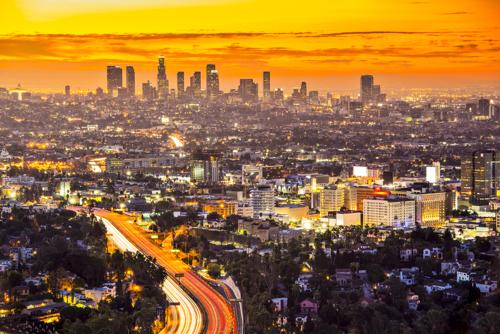 Despite these overwhelming advances, web-enabled technology has yet to metamorphose one area in desperate need of transformation: municipal government. Many American cities are literally crumbling to the ground, their decades-old infrastructure giving way to population growth and the slow, cruel march of time. With zero federal aid in sight, mayors are doomed to patch and repair what they can, knowing that much more work is required. In fact, it will take an investment of at least $3.6 trillion to bring U.S. urban centers up to code, according to the American Society of Civil Engineers.

Last year, the Obama administration introduced the Smart Cities Initiative to address the problem of metropolitan decay. The $160 million program pairs local governments to private engineering and technology firms, with the ultimate goal of transforming American cities into self-sustaining commerce and residential hubs.

"If we can reconceive of our government so that the interactions and the interplay between private sector, nonprofits, and government are opened up, and we use technology, data, social media in order to join forces around problems, then there's no problem that we face in this country that is not soluble," President Obama explained while discussing the initiative in March at the South By Southwest Interactive Conference in Austin, Texas.

For those working to modernize communities here and abroad, the notion of the smart city isn't such a revelatory concept. Innovators across the globe have already begun integrating state-of-the-art technology into urban environments, essentially altering the fabric of everyday life with each newly installed LED street lamp or free Wi-Fi hub.

Los Angeles in a new light
The entertainment industry and the city of Los Angeles are inextricably linked. After all, the Southern California metropolis is home to many of the studios responsible for churning out most big-screen blockbusters and television hits. L.A. itself regularly stars in these works, offering filmmakers a sprawling, sun-drenched canvas ripe with creative possibilities. However, most film buffs believe the city offers far more cinematic opportunities after sunset, when its more than 140,000 sodium street lamps flicker to life, bathing the byways in moody yellow light.

Unfortunately, filmmakers will soon lose the aesthetic power of these fixtures, according to Wired. The L.A. County Metropolitan Transportation Authority is currently in the process of swapping its distinctive sodium street lamps for modern models equipped with light-emitting diodes. These new lamps will not only save the city a considerable amount of money, lower carbon dioxide emissions and improve road safety but also lay the groundwork for more innovative metropolitan infrastructure.

The new LED lamps, which collectively light more than 4,500 miles of roadway, are linked wirelessly to the Automated Traffic Surveillance and Control center. Here, transportation officials can monitor their performance and manipulate them in special situations. For instance, if an ambulance needs to move through traffic unencumbered, personnel can ping applicable streetlights and activate a blinking sequence to warn drivers and pedestrians about the approaching emergency vehicle. This alone could greatly improve citywide harmony and pave the way for more wide-scale improvements.

One New York-based startup is taking things a step further, transforming streetlights into all-in-one power supplies, Curbed reported. Totem, located in Bedford, this month announced an ambitious project that involves replacing the common metropolitan power grid with solar-powered lamps that not only provide energy to nearby homes and businesses but also feature 4G Wi-Fi hubs and charging points. And, like the LED lights that are popping up around L.A., these fixtures, which can measure up to 30-feet tall, can connect to a central switchboard. Totem is currently meeting with city officials around the country in an effort to get its first project off the ground.

"I always say we're at a typewriter moment in the world of energy, " Brian Lakamp, CEO and founder of the firm, told Curbed. "We could make a slight improvement on the existing technology, but we're ready for, and poised for, a great leap. We don't need a better spacebar. It's time to create a computer."

Columbus facilitates connection
Last year, the Department of Transportation debuted the Smart City Challenge, which asked city administrators across the U.S. to submit plans for how they might harness the power of modern technology to improve their infrastructure, Wired reported. The winner would receive $40 million in federal funding to get started. Approximately 78 cities participated, including innovative technology bastions such as Austin, Portland, Oregon and San Francisco.

"City governments across the U.S. are searching for ways to improve the lives of their citizens with modern technology."

In June, the agency announced the winner: Columbus, Ohio. Officials from the Midwestern capital submitted a 78-page plan, most of which centered on Linden, a struggling neighborhood in the northeastern quadrant of the city. Since residents in the area struggle to with mobility, the proposal called for an expanded public transportation system and the construction of web-enabled kiosks that offer bus and train schedules and include ATMs. More importantly, these devices give users the opportunity to swipe in with a transit pass and schedule traceable personal appointments. For instance, if a woman from Linden accesses a kiosk and organizes an appointment at the local hospital, personnel at the health care center can track her through the transit pass to make sure she's still coming. The proposal also included plans for a city-sponsored ride-share program and the development of automated municipal vehicles connected via the cloud.

Of course, it remains to be seen whether Columbus can implement these technologies, even with the federal funding. Still, this project alone shows that city governments across the U.S. are searching for ways to improve the lives of their citizens with modern technology.

"The bold initiatives they proposed demonstrated that the future of transportation is not just about using technology to make our systems safer and more efficient - it's about using these advanced tools to make life better for all people, especially those living in underserved communities," Anthony Foxx, the Secretary of Transportation, said in a press release. "While Columbus is the winner of the Challenge, we believe each city has come out of this process with a stronger sense of how to address transportation challenges with technology and innovation."

Perle has long supported the modernization of American cities, partnering with major municipal agencies like the Golden Gate Bridge Highway and Transportation District to integrate ground-breaking technologies such as gigbyte fiber media converters into urban environments. Contact us today to learn more about our role in developing smart cities.