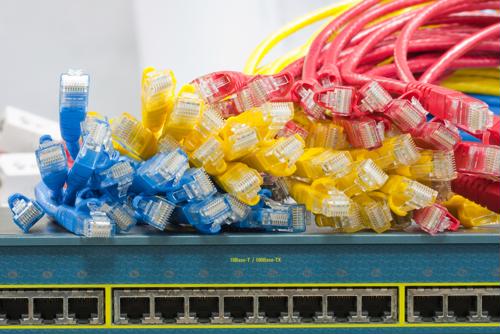 Ethernet has become a fairly de facto network protocol at this point. The technology has been around for decades, advances in twisted pair cables and engineering standards are allowing Ethernet to push speeds upwards of 100 Gbps and there are few applications where Ethernet is not well equipped to meet operational demands. All of this growth doesn't mean that the Ethernet sector isn't isn't still working to push the envelope.

A recent Network World report from the Interop conference in Las Vegas, Nevada, explained that there is still plenty of innovation ahead in the Ethernet sector, with the focus being nuanced elements of Ethernet advances that foster Ethernet use in an even wider range of settings. A few of the most notable areas where Ethernet is evolving include:

"There is still plenty of innovation ahead in the Ethernet sector."

Varied speeds
According to the news source, the event did showcase work on achieving extremely fast Ethernet speeds, with groups showcasing efforts toward 50 Gbps, 200 Gbps and 400 Gbps. However, getting faster wasn't the only goal on display at the conference. Presenters showed work being done to standardize speeds of 2.5 Gbps, 5 Gbps and 25 Gbps. These measures are being taken to keep up with changing hardware demands that are turning the network into a potential bottleneck.

The report explained that the rise of solid-state storage drives has dramatically improved the speed at which storage arrays can transport data out to various resources. This is creating a need for data center networks that fall in between the typical 1 Gbps, 10 Gbps and 100 Gbps demarcations, and standardizing different speeds can solve the performance bottleneck problem.

Wi-Fi infrastructure is the other driver pushing new Ethernet speeds into development. The news source pointed out that advances in the IEEE 802.11ac standard have led to Wi-Fi speeds that often outpace what the wired infrastructure can reasonably keep up with. As wired connections serve as backhaul, they must be able to get more bandwidth to the Wi-Fi access points than they will need to process, making high-performance cabling and network architectures critical.

Automotive Ethernet
Connectivity is becoming a critical component of automobiles, especially as self-driving cars and driver-assist features emerge. According to the report, the Ethernet Alliance told audience members at the event that Ethernet will likely be the de​ facto network technology in automobiles as soon as 2020.

Power over Ethernet
The Ethernet Alliance also explained that PoE functionality is advancing, with a particular focus being placed on improving wattage. The news source pointed out that PoE currently tops out at carrying 25.5W over two pairs of wires. The Ethernet Alliance is working to develop the ability to run as many as 70W over four twisted pairs. PoE advances could also be coming to automotive Ethernet solutions.

"PoE advances could be coming to automotive Ethernet solutions."

Considering the implications of Ethernet's advances
Stakeholders in the Ethernet sector continue to advance the technology, creating a climate in which businesses are continually gaining access to new ways to use the solution to support robust network capabilities. A few key issues that sophisticated Ethernet systems can address for organizations include:

A better ability to mix-and-match with fiber
Strategic fiber-optic cabling deployments have long been playing a growing role in a variety of settings. Fiber has proven ideal when organizations must make long cable runs between areas that need high-quality network performance for endpoints. From there, Ethernet would take over. However, the combination of Ethernet's speed limitations and the total cost of ownership associated with using more robust forms of Ethernet has created some pressure to extend fiber network.

Organizations can more freely use fiber and copper in conjunction with one another if fiber speeds become more varied. For example, interconnecting storage and server areas of the data center is often easier with fiber because of its bandwidth, but it doesn't always require fiber's length advantages. More advanced Ethernet functions may overcome this performance gap, creating a situation in which you are less dependent on fiber, and can instead use it where it makes the most sense for you. Media converters can help you unlock the full potential of this functionality by empowering you to easily convert signal as needed between copper and fiber systems.

Industrial Ethernet
For a long time, Ethernet was unable to offer the combination of performance and lossless packet delivery that was needed in the industrial sector. Recent advances in Ethernet technologies have fueled performance gains that make the technology viable in a wide range of industrial settings - even in automation and control networks when the system is configured with precision. Ruggedized industrial Ethernet switches are necessary to ensure the network can withstand the conditions on a factory floor, but Ethernet is quickly becoming a prominent technology in industry.

Ethernet innovation to continue
Fiber-optic cabling systems can have a transformative impact on networks, but Ethernet still remains valid for a huge array of connectivity options. As Ethernet innovation continues, organizations have the freedom to more flexibly use different cable types and network architectures to meet their needs, ensuring that communications limitations never get in their way.