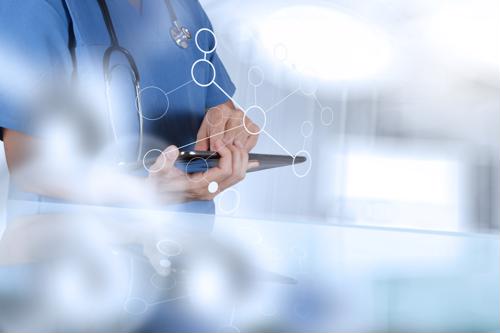 Health care organizations have long supported the adoption of experimental new technology. However, over the last decade, this push to innovate has accelerated substantially.

President Obama's health care law enacted in 2010 essentially mandated the development of a nationwide electronic medical records system and other similar technologies. Specifically, the bill's technology component, called the Health Information Technology for Economic and Clinical Health provision, funneled billions of dollars into hospitals and other institutions in need of modern digital infrastructure, and established an incentive scheme that encouraged care providers to shift from paper records to EHRs, Tech Crunch reported. In 2009, when the Obama administration drafted the bill, only 12 percent of hospitals had the technology. Today, 96 percent use EHRs.

"So if we combine all these emerging technologies, if we focus them and make sure that the connections are made, then the possibility of discovering new cures, the possibility of applying medicines more efficiently and more effectively so that the success rates are higher, so that there's less waste in the system, which then means more resources to help more people - the possibilities are boundless," Obama explained during a speech last year, according to a White House press release.

In addition to promoting new health care technology, the legislation rejiggered federal reimbursement strategies to promote quality, data-backed care as opposed to qualitative treatment methods that lead to over-testing and -treatment, and drive up operations costs.

This shift, along with the health care industry's natural urge to innovate, has produced exciting new technologies, many of which center on the Internet of Things.

Taking scans to the next level
For decades, physicians have used CT, MRI and X-ray machines to examine internal injuries and develop treatment regimens. Consequently, those in the diagnostic imaging sector often drive innovation in the health care space, as these tools are absolutely essential, representing the first line of defense against serious illnesses. In recent years, medical device makers have maintained this longstanding trend and debuted a variety of IoT-enabled scanning technologies, Diagnostic Imaging reported.

Last year, Phillips showed off a mobile ultrasound device at the Radiological Society of North America's annual conference in Chicago. The scanner, called the Lumify, works with a proprietary desktop and mobile application to instantaneously deliver scans to imaging technicians and patients, Radiology Business reported. The device went on sale just before its debut at RSNA and immediately gained attention from radiologists interested in its wireless design, connective capabilities and subscription-based payment options.

"Leveraging a familiar device with portable diagnostic testing makes learning ultrasound easier for new users and more convenient for experienced imagers," Dr. Bret Nelson, an associate professor of emergency medicine at Mount Sinai Hospital in New York, told the publication. "I think that convenience and availability will increase the utility of this technology, improving patient care and efficiency."

In October, the American College of Emergency Physicians cleared an add-on for use with the device, according to a Philips press release. Now, Lumify users can attach a portable cardiac transducer to the device. This small yet impactful tool allows imaging professionals to perform accurate abdominal and cardiac scans in emergency situations. Portable devices such as this streamline the care process and allow physicians to quickly diagnose and treat patients with serious, even life-threatening ailments or injuries.

The shift toward IoT technology has also transformed some of the backend platforms radiologists use to process, disperse and store scans. For decades, hospitals have used picture archiving and communication systems, most of which are proprietary and stored in on-premises servers. However, this poses several challenges for care providers, especially those looking to leverage web-enabled devices and infrastructure to streamline and improve treatment processes. For one, many PACS are produced by competing vendors, making internal and external interoperability impossible. Secondly, on-premises servers are particularly vulnerable these days, as cybercriminals figure out new ways to penetrate institutional networks to steal private patient data.

Sadly, vendors have yet to move toward a more shareable approach. Industry organizations such as the RSNA have stepped in to fill the void for now. In 2011, it launched the RSNA Image Share, a cloud-based scan-sharing system that enables physicians and patients across the country to access scans online, Diagnostic Imaging reported. The organization collaborated with the National Institute of Biomedical Imaging and Bioengineering to develop the platform, which now boasts more than 22,000 images. PACS vendors can even install the RSNA Image Share Edge application to enable cross-platform sharing. On top of that, Institutional developers have access to an open-source community that hosts modular application builds based on the platform.

This project not only facilitates true collaboration between competing vendors but also gives hospitals and other institutions with small information technology budgets the chance to leverage encrypted cloud storage technology and possibly adopt IoT devices.

Wearables that impact lives
This year, worldwide wearable sales are expected to grow more than 18 percent to $28.6 billion, according to research from Gartner. This buying spree will ultimately introduce over 276 million of these data-mining devices into the world, a number that will surely grow as technology companies perfect their products. While many view these devices as more unneeded gadgets in a world already saturated with such items, innovators in the health care space see them as revolutionary tools with the potential to drastically improve patient outcomes. In fact, many have already begun retrofitting wearables for clinical purposes, NPR reported.

In October, Dr. Marc Gillinov, a cardiac surgeon at the Cleveland Clinic in Cleveland, Ohio, published a study in JAMA Cardiology that dissected how useful and accurate consumer-grade wearables might be when measuring key health metrics such as patient body mass index and heart rate levels. Of the five devices tested, three, including the ubiquitous Apple Watch, achieved accuracy ratings above 90 percent. Experts believe, with a little tweaking, such devices could be used to monitor patients with serious conditions such as atrial fibrillation, a common illness that often goes undiagnosed.

Others in the field are bypassing store-bought devices and looking into developing IoT-connected wearables specifically designed for use by professional physicians, The New York Times reported. For instance, a number of vendors have designed wearables that help diabetics monitor their insulin levels and automatically administer hormones when levels dip. However, the Food and Drug Administration has pushed back on these devices in an effort to test their effects and make sure they don't cause harm to users.

Though well intentioned, these roadblocks have frustrated patients, leading some to develop homemade devices and even engineer their own insulin.

"I don't think that we should be surprised that a population of technologically savvy patients, whose lives are dependent on access to a supply of a biological agent, should be interested in taking means of production into their own hands, especially at time when insulin prices have risen at unpredictably alarming rates," Dr. Jeremy Greene, a physician at Johns Hopkins University in Baltimore, told the newspaper.

Movements like this, along with the general progress of IoT technology, has forced medical device vendors and hospitals to move with the times and search for ways to integrate wearables into clinical settings.

The mind behind the machine
Advanced health care tools like the portable ultrasound scanner work best with advanced background processing equipment. With this in mind, innovators in the health care industry have started exploring radical new concepts such as artificial intelligence and machine learning, according to The Times. Bedrock medical institutions such as the University of North Carolina School of Medicine in Chapel Hill, North Carolina, to integrate these advanced processing techniques into exam and operating rooms.

"Supercomputers seem to pose a threat to physicians, but experts reject this man versus machine narrative, believing that machine learning only serves to enrich clinical care."

IBM recently collaborated with the venerated college to deploy its supercomputer Watson in the radiological ward. The machine, best known for beating international chess champions and dominating studied quiz show contestants, reviews scans for more than 1,000 cancer patients and used its extensive diagnostic image database to offer diagnoses. In 99 percent of the cases, Watson recommended the same treatments as human oncologists.

On the surface, Watson and other supercomputers seem to pose a threat to physicians, but experts reject this man versus machine narrative, believing that machine learning only serves to enrich clinical care and help doctors get the full potential out of modern medical devices.

"Humans enabled by A.I. is the way to go with genomics," Dr. Norman Sharpless, head of the UNC School of Medicine, summarized in an interview with The Times.

As the health care industry weathers these dramatic shifts and pushes to adopt IoT technology, Perle will be there, prepared to offer support. For years, hospitals and other institutions in the sector have counted on Perle Ethernet extenders, serial cards, Ethernet serial console servers and other innovative technologies from our product portfolio to facilitate maximum connectivity and support cutting-edge medical devices. Contact us today to learn more about our work in the health care industry.