How IoT technology is transforming the live music experience 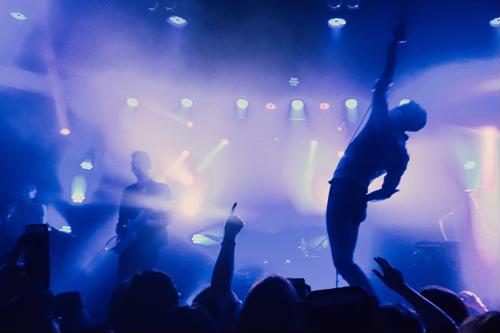 In 2015, Taylor Swift toured the globe in support of her most recent full-length release, "1989." Still images and video from each stop offered exciting yet unsurprising glimpses into the musician's live shows. However, most of this media featured one common, peculiar detail: Audience members in every city, from Charlotte to Shanghai, seemed to sport illuminated wristbands, according to the International Data Group. Journalists at Slate investigated the devices and learned that they were actually wearables designed to blink in time with Swift's songs.

"We use infrared light, which is essentially the technology that's in your remote control," Jean-Olivier Dalphond, commercial director for PixMob, the company behind the bracelets, told the online publication. "It's very simple but very powerful - think of it as installing a very powerful set of remote controls around the stadium, and then sending a signal that triggers the lighting."

The discovery of these unconventional concert accessories touched off a wider discussion on the evolution of the concert experience in the age of the internet of things. Indeed, the rise of connected mobile technology has changed how listeners navigate and take in live music events. From ticketing to actual auditory consumption, IoT devices are enriching nearly every aspect of the modern concert. How?

Wristband ticketing systems
Around the same time Swift launched her 2015 tour, online ticketer Eventbrite acquired the Montreal-based radio-frequency-identification chip maker Scintilla Technologies, TechCrunch reported. The move signaled Eventbrite's investment in an innovative new ticketing technology: the RFID wristband pass. These devices, made of fabric and lightweight plastic, allow event attendees to filter into arenas more easily. In the event that an audience member looses his or her wristband, onsite personnel can program a new one via sophisticated backend software.

The technology is quickly catching on, leading many analysts to believe that it could one day replace the paper ticket as the go-to event credential, according to Fast Company. Music festivals are the most voracious adopters, integrating wristband-based ticketing systems into their operations at breakneck pace, CNET reported. Last year, the Outside Lands festival in San Francisco debuted RFID bracelets that not only allow attendees to enter ticket-less but also give them the power to make purchases without scrounging up cash or credit cards. This not only makes life easier and safer for attendees but also reduces the need for vendors to tote around cash or roll out cumbersome and expensive near-field communication terminals.

Audiences as entertainment
Of course, a number of technology companies are exploring the same territory as PixMob. In November of last year, Hurdl Enterprises debuted the PXL wearable at the 50th Annual Country Music Association Awards in Nashville, TechCrunch reported. Like the PixMob device, this wristband gives audience members the opportunity to contribute to the concert experience via on-time illumination. However, the PXL has more to offer from a user perspective. Concert goers active the device by sending a text containing a special code to an established event line. With this connection in place, onsite technical personnel can trigger lighting fixtures that prompt the devices to push special promotions users via text. This way, attendees can save money while record labels can collect contact information from likely customers and, by extension, help artists.

HURDL CEO and co-founder Betsy McHugh helped launch the company with this latter issue in mind. As a former agent and manager for the Creative Artists Agency, she watched as her clients lost out on music sales due, in part, to the lack of available direct-to-consumer marketing strategies.

"I saw my artists' income decline precipitously," she told TechCrunch. "Everything became about touring, merchandise and brand partnerships."

The PXL solves this issue, allowing labels to establish long-term relationships with music listeners starting at the most direct point of contact: the live show. And, the device adds to the experience itself, giving concert goers the power to participate.

Audio augmented reality
While live concerts have much to offer from an entertainment perspective, they often leave something to be desired where the sound quality is concerned. This makes sense considering the locations in which most of these events take place - outdoor arenas and concert halls are not outfitted to facilitate the optimal aural experience captured in studio recordings. The startup Here One hopes to solve this age-old problem with audio-based augmented reality technology for music listeners, according to Creators.

The company, which was founded in 2013, produces noise-cancelling headphones that not only produce high-quality audio but also give users the ability to manipulate live sound. These devices come paired with an application that includes a five-channel Live Mixing feature. Here, individuals attending live events can actually tailor the sound quality of the music as it unfolds around them.

These IoT innovations are pushing live music experiences forward, benefiting both artists and their fans. As this progression continues, Perle will be there to provide the essential networking infrastructure needed to support IoT deployment in live entertainment settings. Connect with us today to learn more about our experience in the entertainment arena.