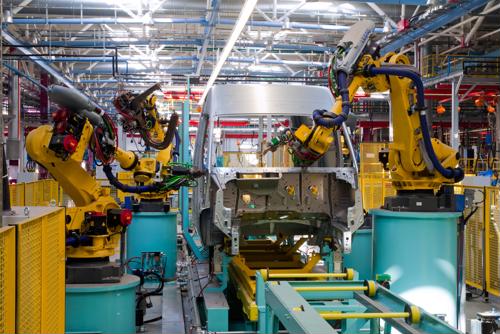 Robots and other automated devices have been in American factories for decades. Most arrived in the years following the first manufacturing automation adoption story: General Motors. The automaker invested heavily in the technology during the 1980s in an attempt to stave off competitors Nissan and Toyota, according to research from the consulting services firm Deloitte. GM ultimately spent almost $45 billion on automated shop-floor equipment over the course of the decade. Even so, the initiative had little impact on the bottom line, as its Japanese challengers continued to net more market share. GM controlled roughly 50 percent of the automotive market when it first embraced automation. That figure had fallen to 30 percent by the mid 1990s.

In the end, the company pinned the loss to the ancillary processes surrounding the new automated workflows, not the robots themselves. Employees required more training and production facilities needed to get tighter. This public learning experience catalyzed the lean manufacturing movement, signaling to companies across the sector that automation could work, so long as related internal activities were modified to support such production frameworks.

Between 1993 and 2007, robotic workloads in U.S. factories increased by 237 percent, according to research from scholars at the London School of Economics. This movement toward automated models is expected to continue. In fact, analysts for the Boston Consulting Group predict investments in industrial robotic technology and similar shop-floor solutions will swell 10 percent annually over the next eight years. Consequently, the total number of tasks executed by robots is also expected to increase, according to BCG. By 2025, these complex fixtures will perform one quarter of all essential production duties. The continued development of the Internet of Things will undoubtedly accelerate this shift, as advanced manufacturing technologies, once the product of internal research and development efforts, become democratized on the open market.

How might these dovetailing trends materialize within plant walls? Some pioneering organizations are already offering up previews of key shop-floor shifts to come.

Robots work away
In 2010, Tesla Motors, the company at the forefront of the electric car movement, purchased an empty automotive factory located in Fremont, California, Wired reported. GM constructed the 5.5 million-square-foot facility in 1962, filling it with thousands assembly specialists. Toyota took over the plant in 1984 as part of a partnership with GM. New vehicles rolled out of its doors until April of 2010, when the Japanese carmaker closed the space and sold it to Tesla for $42 million. The company's CEO Elon Musk hosted a "grand opening" soon after obtaining the structure, though retrofitting it for production was expected to take another year. California Senator Diane Feinstein attended the event, congratulating Musk on his work within the renewable energy sector and thanking him for reanimating the plant, an effort that would surely yield new jobs.

The factory opened in 2012 and now produces 400 vehicles per week. Approximately 3,000 employees man the shop floor, which constitutes only 20 percent of the entire site. However, these workers are not alone - they operate 160 large-scale robotic devices. These fixtures, painted in bright red, border the production line, installing battery assemblies, motors and the complex wiring needed to bring them to life. The entire workflow clashes with the history of the facility, which once churned out 6,000 cars per week via more traditional production means.

Tesla is not the lone automation magnate. Companies from the across the manufacturing sector use the technology. Plastic mold makers now use robotic injectors to fill casts, The New York Times Magazine reported. And, major motor corporations now employ all manners of automated devices, most of which work in tandem with human technicians, according to The Wall Street Journal. Enterprises have learned from the GM model and designed automated production plans that function in the real world.

Of course, GM has continued to invest in the technology since its original test run during the 1980s. The company now uses robots in most of its facilities and just recently released the results of another experimental effort to connect shop-floor equipment with the Internet of Things. In 2015, GM connected its fleet of 30,000 production robots to the internet, allowing them to transmit diagnostic data to the cloud for review, Bloomberg reported. This enabled maintenance teams to view device performance in real time and make necessary changes to avoid downtime. As a result, the carmaker was able to dodge 100 automation failures and the resulting costs over a two-year period.

"Companies from the across the manufacturing sector use automated technology."

Automotive companies lead the way when it comes to robotics. They collectively installed 17,600 new units in 2016 alone, according to data from the International Federation of Robotics. Though, those in the electronics manufacturing subsector also invested heavily in automated production devices over the same span, putting in an estimated 5,100 of these devices. Many enterprises in the metal and chemical and plastic production arena employ them as well.

Jobs on the line
While this progress certainly excites manufacturers and technology workers alike, it worries American workers as they see automated devices taking over duties once performed by humans. Indeed, some companies have eliminated positions due to the adoption of automated workflows. However, the industry leaders actually pioneering these methods are working to create facilities where workers and robots can work in harmony. GM, for example, upped its international payroll from 80,000 to 105,000 employees last year, all while integrating automated devices into its plants, according to data from the Association of Advanced Automation. There is enough room on the shop floor for both man and bot, in large part due to robotic fabrication methods.

Companies in the manufacturing space are poised to revolutionize their industry and usher in a new, more productive era powered by automated workflows. As they catalyze this transformation, Perle will be there to offer assistance, providing the connective framework needed to run complex robotics-based workflows. Industry leaders such as Tesla Motors use our media converters, terminal servers and serial cards to support mission-critical automated technology. Connect with us today to learn more about our work within the industrial space and our commitment to facilitating cutting-edge shop floor solutions.