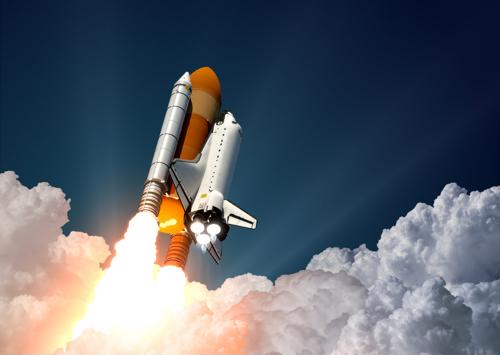 While NASA's recently revealed data center is, unfortunately, not floating in space, the project is still a triumph in terms of consolidation efforts. Responding to the federal government call in 2012 for agencies to perform major consolidations of their sprawling data facilities, NASA's new 16,000 ft Kennedy Data Center will replace a combined 45,000 ft of capacity once spread out across 5 facilities, according to ZDNet.

Floor space isn't the only gain NASA achieved by consolidating. The facility was designed to operate at efficiency levels three times higher than the legacy centers it replaces. In fact, NASA's new facility was carefully constructed to qualify for LEED Silver and meet the Uptime Institute's Tier II standard, certifications that NASA is currently seeking. The space agency's recent consolidation success also showcases the numerous benefits that occur as a natural result of any consolidation of multiple data centers.

NASA's new data center has plenty to teach about how consolidation can benefit IT staff.

Automation through virtualization minimizes unexpected downtime
One commonly used strategy to manage consolidation and streamline infrastructure is the virtualization of servers. Simulating hardware is so space effective in comparison to filling up the data center with rows and rows of racks that IT teams may even be able to consolidate the company's data centers into a single existing facility, rather than invest in a a new, larger space. Connectivity always becomes a factor to consider, especially when IT teams seek to bridge new tools with existing legacy hardware. Thankfully, network tools like serial to Ethernet terminal servers can be used as a pathway between new and old infrastructure that won't compromise consolidation efforts by taking up extra floor space.

Compliance woes decrease when IT staff are responsible for less hardware
Ensuring that data center environments are running according to industry regulations is a time consuming task for IT teams. Operating guidlines continue to grow stricter as cyber attacks grow bolder and more common. Consolidation of multiple facilities into one helps to greatly reduce the strain of compliance management by eliminating many of the redundant responsibilities that come with managing several data centers. Furthermore, best practices from each facility can be used to draft more effective compliance policies for implementation in the consolidated data center.

"Best practices from each facility can be used to draft more effective compliance policies."

App sprawl must be controlled to make consolidation a success
Another beneficial byproduct of consolidation is a reduction of the number of business apps being utilized by the company's multiple departments. If seperate facilities are running different apps to accomplish the same purpose, it's only natural that some of these applications will be phased out in order to streamline operations in the consolidated space.. Failure to take this approach could result in numerous inefficiencies in the data center, including greater risks for unexpected downtime. Some employees may begrudge the inability to use their apps of preference to perform their jobs, but ultimately this consolidation outcome is a benefit for the IT staff as a whole.

Physical security requires a fraction of the resources following consolidation
Data center consolidation simplifies physical security efforts as well. With fewer buildings and entry points to secure, IT staff can focus their energies on equally important tasks like maintenance or education regarding new technologies. APM Digest emphasized that reducing the scope of security responsibilities quickly translates to reduced costs and fewer overall vulnerabilities to physical theft or unauthorized data access. Similar to compliance, leveraging a mix of the control strategies honed at each legacy center will help to enhance security operations at the new facility.

Perle offers a range of cost effective serial-to-Ethernet converters to help meet NERC-CIP compliance for the protection of critical cyberassets in substations. The IOLAN SDS HV/LDC Terminal Server is designed to meet harsh environments associated with Power Substations with attributes such as support for substation AC and DC voltage ranges, extended operating temperatures and meeting emission, immunity and safety approvals associated with substation IT equipment.