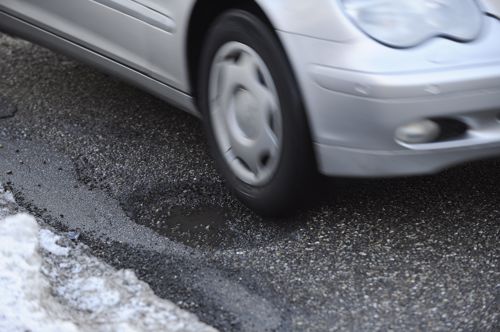 With over 55,000 km of road space in the 77,900 km2 of geographic area, Scotland has a pretty great road network. The only caveat? It can be difficult to manually keep track of the conditions of the country's rural roads, which make up two-thirds of the infrastructure. In fact, only about 6% of the total length of Scotland's roads are considered main through routes.

Traditionally, travelers simply had to deal with the potholes that would inevitably appear on rural roads with the expectation that the right people would show up to fill them in – eventually. Albeit, this has been an ongoing challenge for many regions around the world, resulting in thousands of dollars worth of damage to vehicles. The average repair cost from damage done to vehicles due to poor road conditions is $377.

So how is Scotland attempting to use the Internet of Things (IoT) to essentially wipe the issue of logistics surrounding potholes?

Dunfermline-based start-up, DigiFlec, along with Forestry and Land Scotland (FLS) and CENSIS – an innovative center for advances in tech such as IoT – are working together to develop a "digital transport network management interface" as part of the Scottish Government's CivTech 6 Accelerator Programme. The innovation uses highly advanced sensors and a digital interface to track and update data on roadways, sending information about their condition instantly back to those in charge. Sensors will read variable conditions such as temperature, moisture (the presence of water or ice) and more to distinguish the likelihood that a road requires attention.

These sensors have already been implemented as a test on roads in Blairadam and Auchineden with hopes that the data collected will be able to provide fast, accurate insights into how road conditions change over time based on situations such as weather, season, usage and more. By knowing what temperature and moisture levels pass the threshold for causing breakage in a rural roadway, for example, UK officials will be better set up to make more informed decisions.

The cost of human intervention

Without the need to manually transport inspectors to the thousands of kilometers of Scottish rural roads, including the narrow, winding roads of the highlands, the cost savings could quickly surpass those spent on manufacturing and installation. With real-time monitoring from the DigiFlec sensors, maintenance can be scheduled more proactively, roadways could be managed more effectively and the overall cost of the backlog of repairs on Scottish roads (currently said to be about £1.7 billion) will be reduced.

The demand for transportation technologies

The demand for transportation technology is increasing as the world becomes more connected. The internet of things has made it possible for these technologies to become smarter and more efficient. The use of sensors, data analytics, and artificial intelligence have enabled these technologies to offer more than we ever thought possible.

Learn more about how Perle continues to offer support in maximizing these technologies via IP-enabled Devices and Terminal Servers. Have an idea in mind? We'd love to hear about it – contact us today.