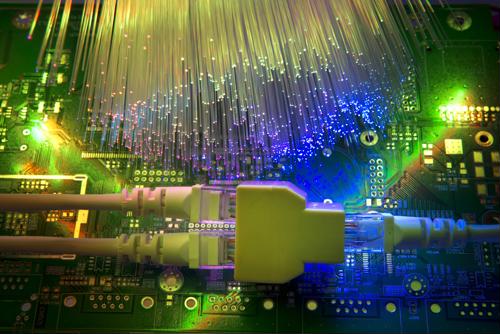 Data collected by broadband speed index Ookla confirms the troubling reality of Internet service in the United States. High-speed Internet in the United States ranks among the highest in the globe, yet average connection speeds for the country barely crack the top 30 mark amongst rival nations. An expose by BBC notes that rampant consolidation by American telecom companies, with no legitimate regulation or competition in sight, has lead to American consumers being overcharged for years.

President Obama's appointment of Tom Wheeler, a former chief telecom lobbyist, to run the Federal Communications Commission eliminated all hope of meaningful oversight being applied to companies like Comcast and Time Warner. The speedy development of fiber-optic technologies, however, has thrown an increasingly painful thorn in the side of the nation's most influential industries.

The battle for broadband
Broadband providers found themselves in a frustrating position in early 2014 as Google Fiber began to draw customers away from traditional broadband bundles. The promise of Gigabit speeds and radically reduced monthly rates quickly generated interest, prompting Google to expand its pilot fiber-optic service to dozens of cities across the country. AT&T and Comcast fought back by developing their own gigabit strategies or by increasing Internet speeds of consumers for free.

A new threat to the monopolization of broadband has risen up in the wake of Google Fiber's success in establishing a new niche. Municipal broadband companies, mimicking the business model of a public utility, have risen up to meet the needs of communities that are too small to pique the interest of a Comcast or Time Warner-sized company. Typically this divergent market has kept municipal companies safe from telecom litigation but quickly advancing fiber-optic technologies have put the nation's largest firms on the defensive.

A conflict of interests
AT&T, for instance, is pressuring the FCC to pass laws that make municipal broadband companies illegal, reports Ars Technica. Representatives from AT&T argue that allowing government-supported businesses to provide broadband as a utility creates an unfair advantage in serving local consumers. The same filing report insisted that tax incentives provided by the state to major telecom companies are necessary, along with new laws restricting the growth of municipal broadband providers, to maintain a fair playing field for telecom companies to operate.

The move by cable companies to shut down municipal broadband providers goes against the popular opinion of the communities in question. Many of the communities that developed municipal broadband services did so in response to poor customer service provided by the very telecom companies spending millions of dollars to terminate the new solution. Thankfully, the widespread availability of fiber-to-Ethernet solutions will make it increasingly easier for communities to retrofit and develop their own broadband services.