NASHVILLE, August 16th, 2017 — The estimated 3,500,000km of pipelines in 120 countries around the world are the most efficient way to transport oil, gas and other liquids. However, operators are under constant scrutiny to avoid the devastating economic and environmental impact of damaged or blocked pipelines. To ensure a safe and clear pipeline, internal inspections are carried out by unmanned “crawler robots” as part of routine maintenance procedures.

The Ryonic Robotics RMIS crawler enables an operator to “walk through” the pipe and examine any weld or flaw in further detail by creating a Virtual Reality (VR) environment of the space through which it moves. This is made possible by transmitting of large amounts of data from cameras, lasers and sonar sensors over a 1000m coax cable tethered to the robot. However, since Ethernet data transmission is limited to 100m, they need to deploy Ethernet Extenders. 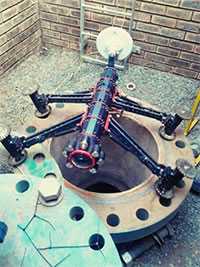 Montgomery comments, To transmit power and data as the length of the tether cable increases becomes more and more difficult. Power is not so difficult but data communication is the key to the whole exercise.

Find out more by reading the Case Study on the Perle Website.

Ryonic Robotics, based in Johannesburg, South Africa, was founded in 2014 and is at the forefront of developing the latest robotics technology in the world. The Company’s first major project was the RMIS inspection crawler that is aimed at the Pipeline, Oil & Gas industries. Other current projects include a magnetic ship hull cleaning robot and a Cobot worker for factory automation and other applications. Ryonic Robotics is a member of the Reunert group.