NASHVILLE, TN - June 13th, 2017 — Modern commercial fishing trawlers rely on all kinds of advanced technology. When Ronan Murrin, a Marine Engineer at Mullglen Limited, installed a new £250,000 fish-finding sonar on the Pacelli, he expected the captain would receive reliable data.

“The skipper knows these waters,” comments Murrin.“He knows where the rocks are down there and that the sonar was not picking them up. It could only operate for a couple of hours before the data got all jumbled.” 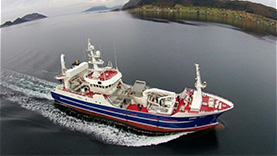 For 5 years, Mullglen and the Sonar Manufacturer tried to find a solution to the reliability issues. Both the transducer and processor units were replaced. The cabling on the boat was upgraded from cat5 to cat7. And, an engineer from the manufacturer spent 4 weeks on the boat. Nothing worked.

With a broad range of experience as an electrician and instrument engineer, Murrin took a step back. With all the generators, motors and refrigeration equipment on board, power surges and blackouts were quite common. Therefore, a UPS (Uninterruptible Power Supply) was installed to provide the sonar equipment with 240v at all times. Then Murrin recalled a fiber optics training course.

EMI (Electromagnetic interference) often occurs in coaxial cables, even shielded ones. The paths that cabling can take on a boat are severely limited, and multiple cables often have to run close to each other. This increases the chances of EMI. Fiber Optics are immune to EMI since signals are transmitted as light instead of current. They can carry signals through places where EMI would normally block transmission.

Therefore, Murrin had a discussion with a Perle engineer and learned how different types of data could be streamed using Media Converters.

“From there, I was 99% confident that this was be the solution we were looking for,” comments Murrin.

A pair of Fast Ethernet Media Converters where installed on board the Pacelli using fiber optics to transmitted data from the sonar transducer at the front of the boat to the display computer in the bridge.

Ronan’s closing comments were, “The sonar manufacturer spent a lot of time and resources trying to rectify the problem. As it turned out, for very little effort and money, we solved it with a couple of Perle Media Converters.”

The full Mullglen Case Study is available to read on the Perle Systems website.

About Mullglen
Mullglen Limited are an Irish Fishing Fleet company incorporated in 1992.