For years, wireless applications that required a peer to peer connection, Ad Hoc mode was the only game in town. This convenient mode of operation enables wireless machine to machine connections by allowing two or more stations to communicate directly with each other without an access point routing their traffic.

However, ad hoc networks using WEP encryption may generate security risks because they do not employ any measures to authenticate users. This means that any station within range can connect to other stations that are configured to allow ad hoc networking.

According to the US Department of Commerce’s National Institute of Standards and Technology ( NIST ), hackers can exploit the IV portion of the RC4 key used in WEP, resulting in a passive attack that can recover the RC4 key after eavesdropping on the network. Depending on the amount of network traffic, and thus the number of packets available for inspection, a successful key recovery could take as little as one minute. 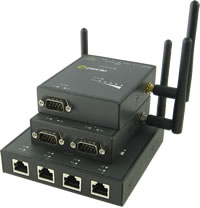 This legacy technology was therefore superseded by the stronger protection offered in the IEEE 802.11n standard, specifically WPA and later WPA2.

SoftAP for up to 6 wireless clients is supported on the following products: