In a ring network each Ethernet switch is connected to two other switches forming a ring. The benefit is that each switch has a redundant connection (links) into the network and may also provide a more cost effective cabling infrastructure than using an aggregation switch at a central location. For these reasons, ring topology networks are popular within industrial infrastructures (Fig 1). 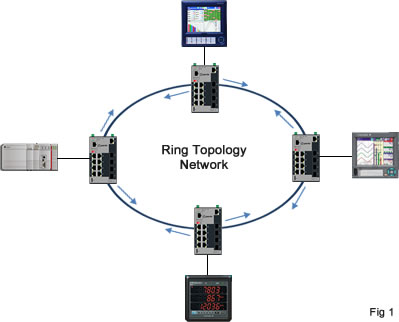 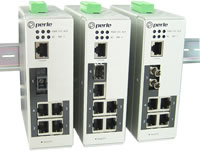 Get a quote
Product question?

The disadvantage in forming a ring network using switches is that using this topology introduces a “switch loop” condition. The loop creates broadcast storms as broadcasts and multicasts are forwarded by switches out of every port. The switch or switches will repeatedly rebroadcast the broadcast messages, flooding the network. Since the Layer 2 header does not support a Time to Live (TTL) value, if a frame is sent into a looped topology, it can loop forever severely consuming all available bandwidth on the loop making the network unusable.

One resolution to this problem is to simply break the loop somewhere in the ring.  Spanning Tree protocols such as RSTP were developed to detect these switch loop conditions and then intelligently reconfigure the network to provide this break, eliminating the switch loop. Also, if anything happens in the network, a topology change notification is sent out to create a different safe path.

Although effective enough for many networks, Spanning Tree protocols take a relatively long time for this re-convergence to complete. RSTP, as an example, can take a few seconds for the network to recover which is not good enough for mission critical industrial Ethernet applications.

Specialized Ring protocols have been designed for mission critical industrial networks operating in a ring topology providing a recovery time of 10ms or better, significantly quicker than RSTP. Media Redundancy Protocol (MRP) is a common standards-based protocol ( IEC 62439-2 ) which provides this capability.

The way MRP works is that a “Ring Manager” switch will drop ( block ) all packet forwarding on one of its two designated ring ports (Fig 2), in effect “breaking” the switch loop. All the traffic from devices connected to all the switches in the loop will still have a path to each other, with redundant links, but without the harmful switch loop. 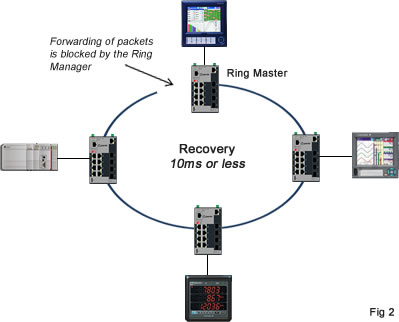 The Ring Manager is in constant communication with its MRP peers. If one of the two links on any of the other ring nodes detects a failure, the client node will send a message to the Ring Manager which will then unblock its blocked port enabling communication again between all of the switches (Fig 3). 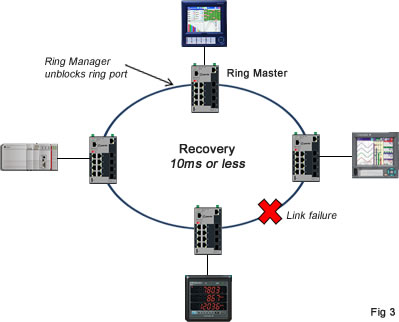 During these topology change events, the various switches on the ring will be informed to clear the MAC tables that they have built-up so they can re-learn the port to destination MAC addresses of the devices connected to the ring.

Given the intelligence behind the protocol, it is strongly recommended that each switch node in the ring supports MRP.