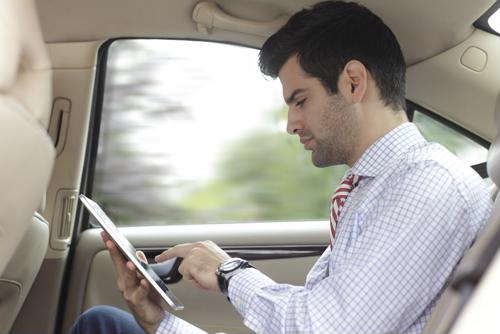 More than six decades ago, President Dwight D. Eisenhower signed into law the Federal Highway Act and sparked a transportation evolution that continues today. However, the next phase of this journey has little to do with the roughly 46,000 miles of interstate that came about as a result of this legislation. Instead, innovators in the industry have gone to work modernizing vehicles by equipping them with cutting-edge connected technologies.

Currently, more than 700 organizations populate what analysts call the connected transportation market, according to the research firm Venture Scanner. Together, these companies share just over $24 billion in research and development funding. So far, myriad new technologies have rolled off the line, many of which have the potential to change how we navigate the many highways and byways that traverse this country.

Driverless vehicles on the move
In recent years, technology giants such as Google and Tesla have embraced automated transportation technology, publicizing driverless vehicle prototypes that could very well make driving to work a hands-free affair. Most models leverage complicated sensor systems and GPS-enabled software capable to pinpoint the fastest possible routes and avoid danger along the way. However, newcomers to this niche space have found ways to further improve these highly advanced vehicles.

For instance, one startup called Drive.ai is in the process of integrating artificial intelligence technology into driverless cars, The New York Times reported. The San Francisco-based firm, which employs graduate students and researchers from the nearby Stanford Artificial Intelligence Laboratory, has developed machine-learning technology that allows driverless cars to interact with cyclists, pedestrians and others on the road.

"Most people's first interaction with self-driving cars will not be as a rider, but more likely as a pedestrian crossing the street," Carol Reiley, a Johns Hopkins University-trained roboticist co-founder of Drive.ai, told The Times. "I think it is so important for everyone to trust this type of technology."

The vehicles in development at Drive.ai don't communicate via robotic vocalizations. Instead, they use advanced external visualizations to notify passersby of their intentions. Although this technology seems farfetched, many inside and outside the industry have confidence in driverless vehicles with machine learning capabilities. In fact, the California Department of Transportation granted the startup a license to test its cars on public roads this past year.

Companies in the connected transportation industry are linking smartphones and other IoT devices to vehicles.

Drive.ai has carved out a unique space in the connected transportation sector because it addresses an issue the larger firms in the field have so far failed to address: human-vehicle interaction. Experts in the field believe automated cars must include features that enrich this connection to truly find permanent places on roadways here and abroad, according to the MIT Technology Review.

"The sensing and processing difficulties that many of the key technology firms are currently focused on will be solved faster than our ability to devise cohesive human-centered designs," Bryan Reimer, a research scientist at MIT and associate director of the New England University Transportation Center, explained.

Even so, many American motorists and pedestrians have already encountered driverless cars during their commutes. In September, rideshare leader Uber tested its first fleet of automated cars in Pittsburgh, The New York Times reported. As a precaution, an Uber employee manned the vehicles, riding along to make sure things went smoothly. Each car came outfitted with more than 1,400 aftermarket modifications. Cameras, lasers and advanced detection tools monitored road conditions and shuttled passengers along. Those who were uncomfortable leaving their fate up to raw processing power could access a touch screen that allowed them to halt the car immediately. The device also displayed a vehicle-generated infrared layout. After each ride ended, passengers received 3-D recreations of their routes.

Pittsburgh, a notoriously difficult city to navigate via car, proved to be the perfect testing ground for Uber's driverless program, which CEO Travis Kalanick considers an "existential" concern for the company. As the autonomous car movement grows, this will become true for the myriad organizations investing in driverless technology. Additionally, traditional car companies such as Ford, G.M. and Volvo are entering the market, partnering with key technology firms to develop driverless models that consumers and pedestrians can trust.

Addressing the here and now
While the above projects and others like them present new opportunities for motorists, most are not yet ready to enter the market. However, this doesn't mean connected transportation technology only exists within the confines of development coding centers and experimental production facilities. Carmakers around the world are integrating exciting new features into the thousands of models that roll off the assembly line every day.

"Car companies have, by and large, embraced mobile Wi-Fi technology."

Auto companies have, by and large, embraced in-car Wi-Fi technology, according to Business Insider. Now, many models come equipped with connectivity packages that allow drivers and passengers to leverage personal, vehicle-generated networks. G.M., for instance, offers 4G LTE options with its vehicles. Similarly, high-end manufacturers such as Audi, Land Rover, Porsche and Tesla partner with AT&T to provide on-the-road internet service for their customers. Experts expect more carmakers to join the movement as engineers perfect this technology and consumers adopt more devices in need of Wi-Fi.

"The Internet of Things is really what's driving this," Matt DeWolf, director of mobile strategy for the vehicle connectivity firm Runzheimer, told the publication. "The connected car is an appliance, and it will play a major role in this growing ecosystem of connected devices."

Technology companies have even developed on-the-go internet devices for drivers who refuse to part with their non-connective cars. In 2015, AT&T released a portable router that plugs into the stock diagnostic ports installed in vehicles produced in 1996 and onward, according to a press release.

In addition to Wi-Fi-focused improvements, many carmakers are also swapping proprietary GPS technology and dash operating systems for open-source alternatives. This allows motorists to sync existing devices with their in-car systems and access mobile applications such as Google Maps or GasBuddy, a popular platform that enables users to view and compare fuel prices at nearby gas stations. These small changes give consumers a taste of the data-rich on-road ecosystems available through connected transportation technology.

As this trend moves forward, Perle will be there every step of the way, working with industry leaders like Tesla to streamline and automate their production workflows with Ethernet media converter modules, console servers and other essential infrastructure. Contact us today to learn more about our work in the transportation and automotive sectors.