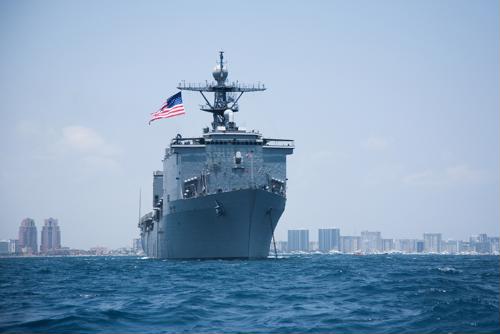 In 2017, researchers at the Defense Advanced Research Projects Agency announced a new program, named the Ocean of Things, aimed at improving situational awareness of maritime conditions across the globe. The multi-year project sought to deploy thousands of small, low-cost floatation devices over large ocean areas to help create a distributed sensor network that would be accurate, efficient and affordable.

Three years later, DARPA is starting to transition into phase 2 of the program which could see upwards of 15,000 new floats installed across a 150,000-kilometer area off the coast of Southern California. To understand how this large-scale deployment could benefit military and research applications in the years to come, let's take a closer look at the Ocean of Things project from its earliest conception.

Mapping the OoT: Then and now
The Ocean of Things program was publicly announced in December 2017 with the goal of overcoming the limitations of existing data-gathering technologies deployed in the world's oceans. Until recently, military and scientific researchers relied on outdated, disconnected systems that served a variety of historical purposes, from tracking soviet submarines during the Cold War to detecting deep-ocean tsunamis before they made landfall. By creating a single, unified sensor network, DARPA hopes to bring its data collection and analysis capabilities into the modern era and capitalize on recent innovations in internet of things technologies.

To build this advanced network of floating sensors, DARPA is planning to equip a fleet of small buoys with water-proof sensors that can collect detailed environmental data, including ocean temperature, sea state and GPS location. Unlike other data-gathering floats, DARPA's system would also be able to track the activity of commercial vessels, aircraft and even the surrounding wildlife. All collected data would be transmitted to the agency by satellite and stored within a secure cloud network, allowing for real-time monitoring and analytics.

Alongside overt military applications, DARPA believes its seafaring sensors could help improve ocean modeling, which is essential for accurately forecasting the weather, locating individuals who have fallen overboard and identifying debris from aviation and maritime crashes, Signal Magazine reported. But to successfully roll out the OoT, the agency first needed to tackle two key technical challenges: float development and data analytics.

Currently, DARPA is working alongside researchers from three renowned technology firms to develop the next-generation floating sensors, including the Palo Alto Research Center, Areté Associates and Numurus LLC. On the back-end, the agency has partnered with Leidos, Draper Laboratory, SoarTech and Geometric Data Analytics to help build out the software it needs for data visualization, device control and performance forecasting. Once DARPA has finalized their device and network specifications, the agency will begin contracting long-term suppliers and ramping up its deployment efforts.

Phase 2: Driving innovation through competition
The second phase of DARPA's Ocean of Things program will pit suppliers against one another in a series of events designed to test the efficiency and long-term viability of proposed floatation devices and data analysis systems, GCN reported. No matter which vendor wins the contract, the agency hopes to build a finalized system of around 50,000 floats across 1 million square kilometers, or 1 sensor per 20 square kilometers. The current plan is to deploy floats with greater density to figure out the optimal distribution of devices and account for unexpected complexities. For example, DARPA needs to determine how its floats will be charged while in service, and whether any human intervention is needed in their long-term maintenance. While solar-powered batteries may help automate the sensor network in theory, there are a variety of technical challenges that could undermine the OoT in practice.

Although the program is still in the research and development phase, many organizations, universities and government agencies have expressed interest in the project. DARPA is already partnering with the National Oceanic and Atmospheric Administration and the National Weather Service to enhance weather and ocean modeling, while the National Academy of Sciences is interested in leveraging the sensor network to study the Gulf stream. There is also a possibility that the completed OoT could be integrated with similar systems deployed by friendly nations or commercial organizations. Generally speaking, the more sensors the agency is able to add to its network, the more accurate its data will be.

"It's about serving the end users. If you can use that data, we can generate it for you," said John Waterston, program manager of DARPA's Strategic Technology Office, in an interview with Signal Magazine. "It's a little bit like floats-as-a-service or data-as-a-service."

Beyond the immediate deployment challenges, organizations that are given access to the OoT may need to scale up their data storage infrastructure to accommodate the massive amount of information that will be generated by a global network of sensors. Luckily, Perle offers industrial-grade connectivity tools that are durable, scalable and efficient, even in IoT-enabled environments. To learn how our reliable console servers and network switches can support your future IT investments, read through some of our customer stories.