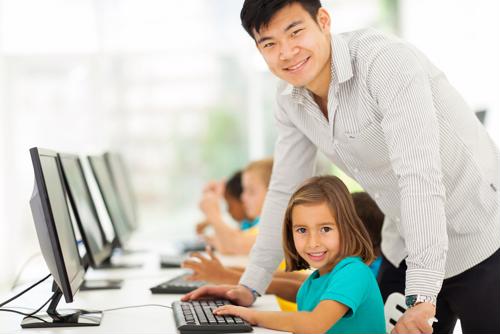 Earlier this month, Learning Assembly, an education nonprofit funded by the Bill and Melinda Gates Foundation, released the results of national survey meant to gauge how parents perceive K-12 instructional technology. Of the more than 1,000 guardians who participated in the study, 66 percent said they had observed firsthand the integration of digital learning tools into the classroom. And, an astonishing 93 percent said they believed this technology was improving instruction, allowing teachers to develop tailored lesson plans to fit the needs of individual students.

These results are the product of a widespread push to equip students of all ages with cutting-edge learning technology. Why? Computer-based instructional tools not only give pupils more options when it comes to absorbing and analyzing information on core subjects such as English, history, math and science but also give them the skills they need to survive in a modern, technology-driven job market in which even simple service jobs once designated "unskilled" require some technical know-how. For students with higher aspirations, technology competencies are even more important. Today, an estimated 80 percent of middle-skilled positions - jobs that require more than a high school diploma but less than a bachelor's degree - involve computer-based duties, according to research from Capital One Financial Corporation and the employment analytics firm Burning Glass Technologies.

The devices and systems school districts and universities use to teach such skills vary but all share one common and essential trait: a connection to the web.

In recent years, educators at all levels have integrated innovative technology into the classroom.

Learning management systems shift
Learning management systems have been a part of the education landscape for some time. The first rudimentary LMS platforms appeared during the late 1990s, the nonprofit Educause found. Now, 99 percent of colleges use these systems and have for an average of eight years. Surprisingly, this technology has been slow to improve, with most platforms featuring components one might find in an LMS solution from the 1990s. However, in recent months, several innovative newcomers have entered the fray, intent on improving upon the concept by extracting platforms from their insular institutional silos and connecting them to the web at large.

In August, Facebook announced the launch of a proprietary learning application that harnesses the power of internet connectivity and social media to empower students, The New York Times reported. The technology giant partnered with Summit Public Schools, a nonprofit charter school system based in Bay Area, to roll out a pilot program for over 120 K-12 institutions in the area. The platform, called the Summit Personalized Learning Platform, allows students to design their own lesson plans and access a long-term planning tools to configure educational goals ranging from "learn to code" to "become an investigative journalist," according to a Facebook news release.

Google and Microsoft have also attempted to bolster the LMS market by supplementing existing systems with web-based tools such as Google Apps for Education and Office 365 Education. Even Amazon has its sights set on the sector, debuting Inspire, an online instructional resource center for educators.

Devices enter the classroom
Along with more connected LMS platforms, devices have also entered the classroom. Schools across the country now employ tablets and other internet-enabled tools to help students better engage with essential subjects and improve retention, The Times reported.

"I think this could very well be the biggest thing to hit school technology since the overhead projector," Scott Wolfe, principal at South Mountain Elementary School in Millburn, New Jersey, told the newspaper.

These devices not only offer new engagement opportunities but also allow instruction to extend outside of the classroom, as kids can continue application-based lessons on personal machines at home. Additionally, the apps themselves facilitate new instructional approaches. Teachers can now leverage mainstream web-based programs to reinforce lessons and keep their students engaged, no matter the subject.

"Some educators strive to do more than simply integrate these mobile applications into the classroom - they want their students to develop the programming skills required to create them."

With this in mind, Microsoft in January acquired the startup Minecraft Education, the software company responsible for creating an education-focused version of the popular world-building game Minecraft, according to The Times. Since its release in 2011, innovative teachers throughout the U.S. have used the mobile application to supplement classroom instruction, leveraging its sandbox-based interface to lend students limitless creative tools.

"I think it wouldn't work as well as it does in classrooms if it wasn't so fun to play," Joel Levin, founder of Minecraft Education and a former New York-based computer teacher, explained. "The term 'chocolate-covered broccoli' is often applied to bad learning games. It's fun, so kids are engaged. That gets them in their seats."

Coding becomes commonplace
Some educators strive to do more than simply integrate these mobile applications into the classroom - they want their students to develop the programming skills required to create them. Many experts and invested outsiders champion this approach, including President Obama who made it a point to discuss the subject in his final State of the Union address in January, NPR reported.

"In the coming years, we should build on that progress, by ... offering every student the hands-on computer science and math classes that make them job-ready on day one," he said.

Some groups have begun developing the infrastructure needed to bring Obama's vision to fruition. For example, the New York City Department of Education and Los Angeles Unified School District have announced plans to offer computer science classes. Of course, the competencies covered in these courses not only prepare students for the technology-centered job market but also offer them new methods for learning foundational ideas important in other subjects, especially those associated with math. Such lessons also help participants develop their problem-solving skills, equipping them with the power to analyze and possibly solve problems of any kind.

To facilitate these innovative sessions, school computer labs are slowly adopting desktop and mobile applications that teach the basics of computer programming and give kids the web-based space they need to fully explore the subject. Students whose school districts do not yet offer these classes often turn to the hundreds of third-party organizations that offer coding boot camps.

With these courses and the tools and systems that enable technology-based instruction, teachers are stimulating engagement in the classroom and giving their students what they need to achieve success long after graduation. Perle has long supported these forward-thinking educators, providing colleges and schools in the U.S. and abroad with the hardware they need to maintain healthy networks and support cutting-edge learning technologies.

Contact us to learn more about our fiber media converters and serial cards.