Esports revolutionize the 'field of play' with connected technology 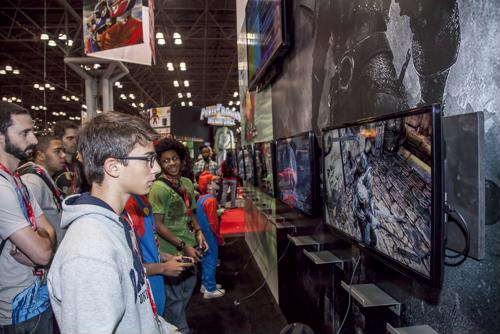 Channel surfers who tuned into ESPN 2 on the evening of April 26, 2015 were confronted with an unusual image. Ten young men, split into two teams of five, sat at separate arching workstations staring into computer screens. They smashed keyboards and clicked mice as creatures from another realm battled on massive LCD displays in the background. Announcers shouted excitedly as hundreds of in-person onlookers cheered. Had enterprising teenagers somehow hacked the broadcast to air some underground video game competition?

No. The event was regularly scheduled programming, according to Motherboard. The teams on screen, hailing from Arizona State University and the University of California, Berkeley, respectively, were locked in a multiplayer match of "Heroes of the Storm," a popular computer game. Hundreds filled the Shrine Auditorium in Los Angeles to watch the contest.

Traditional sports enthusiasts offered predictable reactions, decrying the the perceived degradation of a celebrated media outlet known for showcasing the physical heroics of sports legends such as Michael Jordan and Wayne Gretzky. Most framed the broadcast as a ploy to attract caffeine-addled gamers with little interest in typical athletic contests. In actuality, the competition marked the arrival of a force that has grown to challenge established pastimes: esports.

The esports market is expected to grow to more than $696 million this year, according to projections from the research firm Newzoo. By comparison, the National Basketball Association, which has existed in some form for roughly 80 years, netted $5.87 billion in 2016, Statista reported. In short, esports is an ascendant industry with global appeal, making it a legitimate competitor within the athletic realm.

From hobby to national pastime
The origins of the esports industry lie in hotel ballrooms of the 1990s, The New York Times reported. In these spaces, early video game devotees hosted informal tournaments in which players would face off in first-person shooters or fighters. Impressive crowds often materialized and winners routinely took home thousands in prize money. The movement gained further steam at the turn of millennium, when players in Asian countries such as South Korea took competitive gaming to new heights. For example, more than 40,000 people assembled at a soccer stadium in Seoul to watch the 2002 world championships for "League of Legends," which many consider to be the most popular game in the world.

Events like these catapulted gaming into the commercial space and transformed ordinary people into legitimate stars.

"Pro gaming exists in its current form and size in large part thanks to the people who made it possible in South Korea," Dutch professional gamer Manuel Schenkhuizen told The Times."Other countries took years to catch up and are to this date trying to mimic some of their successes."

Formalized tournaments and leagues began sprouting up in nations across the globe, including the U.S. However, traditional sports fans bristled at this development and often refused to recognize esports as actual athletic competitions worthy of wide appeal. In fact, in the years leading up to the 2015 ESPN 2 broadcast, the network's CEO, John Skipper, rejected the notion of esports outright, The New Yorker reported.

A different kind of skill set
Indeed, esports require few physical skills. However, this does not mean they are easy to master. Great gamers have highly-attuned reasoning and critical-thinking competencies that allow them to perform digital tasks that seem impossible. Additionally, the dexterity and reflexes needed to execute high-level moves are also astonishing. These requirements make participation an extremely mentally- and physically-taxing affair. Cash prizes, which can total in the millions, exacerbate stress.

"Imagine playing a concerto on a piano, and if you miss one note the entire orchestra stops playing and you're kicked off and you lose your job," Sean Plott, an esports announcer, told The New Yorker. "That's what this is like."

Consequently, the best of the best practice constantly. However, unlike traditional sports, these sessions do not unfold behind closed doors. High-ranking professional players sharpen their skills in public, broadcasting test matches via online streaming platforms like Twitch. Here, amateur gamers watch as legends in the making perfect their moves. In fact, Twitch users consume more video than YouTube purveyors, watching an estimated 421 minutes of content per month, according to TechCrunch. Comparatively, the average YouTube user views 291 minutes per month.

"Imagine if LeBron James and Michael Jordan, in every practice and every live N.B.A. game, had a GoPro camera strapped to their chest and they had an earbud where they can hear people ask direct questions and occasionally answer it when they're playing," gamer Dennis Fong told The Times. "That level of access is unprecedented."

Changing mentalities and moving forward
Attitudes toward esports are starting to change here in the U.S., as video game competitions get more exposure and leagues and oversight committees form. In September of last year, several professional esports squads combined to launch the Professional Esports Association, Polygon reported. This group joined the World Esports Association as one of the premier event organizers. Both operate much like the NBA or National Football League, overseeing owner-backed teams that compete for money, a portion of which goes to fund player salaries and benefits and operational needs.

"Attitudes toward esports are starting to change here in the U.S."

This industry-wide crystallization has attracted advertisers and other external backers looking to cash in on a growing phenomenon. Universities across the country are even putting together teams to compete in collegiate contests, leading many to suspect that the National Collegiate Athletic Association may soon get involved, according to The Times. On top of this, the U.S. government now grants visas normally reserved for traditional athletes to foreign gamers flying in for competitions.

All of this activity has galvanized the media organizations, forcing them to carve out online real estate for esports coverage. For example, outlets like the BBC, ESPN and SkySports now maintain verticals dedicated to professional gaming events, Sports Illustrated reported.

As computer-based esports leagues prosper, alternative competitions develop. For example, mobile gamers are mobilizing in an attempt to put smartphone-based competitions on the map.

These forces could potentially vault esports to the top of the athletic realm. Those building the industry from the ground up are working to future-proof it, establishing development pipelines that resemble those found in classic sports.

"To use a football analogy, right now there's only the NFL. What we're doing is building out these tiers - like pee-wee, pop warner, high school," Andrew Paradise, CEO for the mobile gaming platform Skillz, told Sports Illustrated. "We are democratizing esports."

As esports grow in popularity, Perle will be there to provide broadcasters and venues with the networking equipment they need to beam and host professional gaming tournaments. In fact, we already support early investors like BBC and ESPN, both of which employ our device servers, fiber media converters and Ethernet extenders to bolster connectivity and provide optimal content delivery services to readers and watchers alike. Connect with us today to learn more about our work in the broadcasting, entertainment and sports industries.