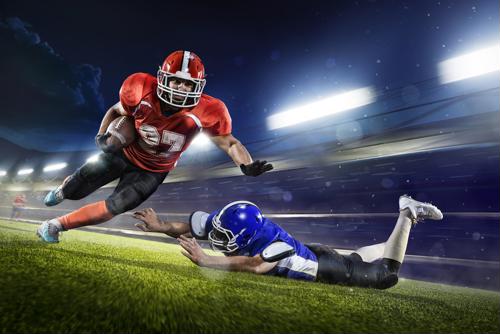 More than 113 million people watched the New England Patriots defeat the Atlanta Falcons 34-28 in the big game, according to Nielsen. These viewership numbers come as no surprise to those familiar with the sport and its status within American culture. Fans have for decades fawned over professional and amateur football. In fact, most gather three days per week to watch as quarterbacks deliver down-field touchdown strikes and linebackers dole out precision full-body blows to receivers and running backs. Americans revel in the chaos and excitement of the game.

However, public opinion has shifted slightly in recent years. The emergence of chronic traumatic encephalopathy - a brain injury commonly found in football players - has spooked once devoted fans and forced those in the National Football League and other related organizations, including the athletes themselves, to question the validity of the sport.

Last year, researchers for the Center for Public Opinion at the University of Massachusetts, Lowell conducted a nationwide poll on CTE and overall safety in modern football. Approximately 87 percent of respondents said the rise of the condition constituted a "serious public health issue." Additionally, 78 percent believed children 14 and under should not participate in organized football as a result.

Changing attitudes among adults, along with public outcry from former players and other figures outside of the sport, could pose problems for stakeholders as they try to cultivate younger fans and keep the tradition alive. In fact, some experts have predicted that the game could die out entirely unless serious steps are taken to improve on-field safety, The Verge reported. The NFL and its partners are now attempting to address these concerns by introducing revolutionary connected technology designed to keep players healthy, even as they navigate the gridiron.

Bigger, faster and stronger
American football has been around since the late 19th century. However, only now are medical professionals delving into the physical impact of the game. Why? For one, modern health care technology and research techniques make it possible. Secondly, the game of football has become more violent, resulting in a larger sample size of serious injuries. Experts have connected this increase in on-field ferocity to improved player conditioning, according to NPR.

The publication explored the physical attributes of two defensive players from opposite eras: Morris Badgro, who was active during the 1920s and 1930s, and Haloti Ngata, a modern player. Badgro weighed roughly 190 pounds and measured 6 feet tall, allowing him to deliver a helmet hit of around 4.9 tons. Ngata, who weighs 335 pounds and stands at 6-4, can make helmet contact registering 8.4 tons. In essence, the emergence of bigger, faster and stronger athletes has made football more dangerous, necessitating new on-field safety protocols.

Additionally, medical researchers postulate that hit volume factors into the equation as well, meaning regular low-energy tackles from a player like Ngata could slowly chip away at cerebral tissue and ultimately cause CTE.

Robots bear the brunt
In July of last year, three NFL teams - the Baltimore Ravens, Los Angeles Rams and Pittsburgh Steelers - incorporated robots into their practice routines, ESPN reported. Each rolled out Mobile Virtual Players - mobile tackle dummies that weigh between 160 and 180 pounds and can run the 40-yard dash, a speed-training staple, in 5 seconds flat. Engineers at Dartmouth College in Hanover, New Hampshire designed the hulking devices, which cost $8,000 a piece.

The robots can stand in for players during practice, cutting down on fatigue and preventing possible injuries. Plus, the fixtures open up new possibilities for teams and league personnel looking to collect hard data on the hits the players regularly give out and withstand - information that could possibly improve safety. The Dartmouth researchers responsible for fabricating the original MVP prototype are currently constructing a new version with an embedded accelerometer that can measure the force with which players contact the device.

"Medical science is becoming aware that CTE is related to a history of many subconcussive hits and not just the 'bell-ringers' that make the highlight reel," John Currier, CEO for MVP, told the publication. "It's that reduction - hopefully near elimination - of the repetitive, subconcussive hits in practice that may be the greatest contribution of MVP."

The MVP has also made its way to the amateur ranks, The New Yorker reported. In 2015, Roger Harriot, head coach for the varsity football team at St. Thomas Aquinas High School in Fort Lauderdale, Florida, lobbied his administration to purchase two MVPs after several of his players suffered serious head injuries. The devices, along with a no-contact practice policy, resulted in an injury-free season.

"You're taking one player who can get hurt out of the equation, but, more important, your helmet is not hitting another hard helmet - it's hitting cushion," Harriot explained. "The helmet-on-helmet is the dangerous part."

New coaching methods for a modern game
This is the situation Eugene Teevens, head coach for the Dartmouth College football team, envisioned when he asked students at the college to design the MVP back in 2009. The coach understood that the modern game necessitated new safety precautions and hoped such a device might improve things, starting on the practice field.

"It's real simple - the more you hit, the more you get hurt. And I'm in a unique position to add hits to someone, or take them away," Teevens told The New Yorker. "If we don't change the way we coach the game, we won't have a game to coach."

"The NFL granted $50,000 to three different technology firms, including MVP."

Sweeping change on the way
In addition to advanced devices such as the MVP, teams across the NFL and beyond are looking into supplementary technology to promote safety. For example, Seattle Seahawks wide receiver Doug Baldwin promotes a revolutionary new helmet that gives like an automobile bumper to absorb impact, Digital Trends reported. Currently, most models are made of hard plastic and offer little support during hard hits.

Another device, called the Vector MouthGuard, also has transformative potential, Wired reported. The synthetic jaw protector contains embedded sensors that track head movement and record information that can help trainers and on-field emergency responders diagnose concussion symptoms. The mouth guard has spawned a number of spin-offs that monitor for dehydration and other conditions that can put athletes out of commission temporarily or lead to long-term health problems.

Even more importantly, the NFL is helping to develop such innovations, according to a league press release. Earlier this month, the organization granted $50,000 to three different technology firms, including MVP and Windpact, a startup that manufacturers energy absorbent padding players can wear beneath their uniforms to stave off injury. Teevens told the NFL he hopes it continues to invest in cutting-edge technology, as he believes it will help make the game safer and, ultimately, save if from collapse.

As the NFL and its external partners improve safety on the field, Perle works to facilitate connectivity on the sidelines and in the stands. Our serial to Ethernet and Fiber to Ethernet technologies help networks broadcast the biggest games and fans in attendance use their web-enabled devices as the live action unfolds. Contact us today to learn more about our work in the broadcasting and sports sectors.