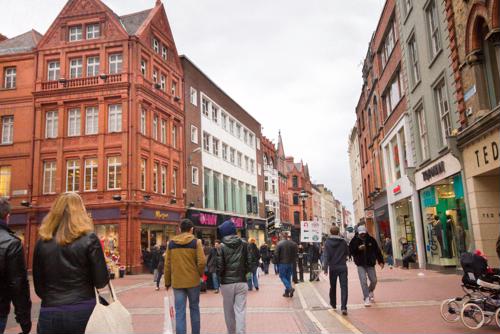 Companies with data centers must think long and hard about location when they consider erecting a new facility. The right ecological and political climate offers countless savings for businesses in terms of tax incentives, opportunities for cost-effective temperature control and more direct access to international clients. In fact, companies have become more comfortable with expanding their data center footprint overseas - access to tools like remote console servers makes it easy to keep multiple data centers connected.

Environments that are ideal for one data center are typically idea for multiple data centers, so emerging data center hubs are quickly populated by companies looking to get a deal on their next expansion. Data center growth in Ireland has taken a sudden upswing as a lengthy list of industry giants build up the local data center industry.

Ireland is quickly becoming Europe's hottest tech hub
According to TechCrunch, Apple recently announced a $2 billion investment plan to build two state-of-the-art data center facilities in Ireland and Denmark. While Apple is certainly not the first tech company to start building data centers in Ireland, the blessing of Apple is a clear sign that Ireland has all the ingredients necessary for cost-effective data center growth.

Dublin in particular has been the site of several data center development projects, according to The Irish Times. Microsoft began construction on its 500,000 sq ft Grand Castle center in 2009, followed by facilities built up by Amazon and Google. The resource pointed out that data center construction has been ramping up in the area since the early 1990s - this pre-existing infrastructure is a key draw for companies looking to expand without worrying about initial investments like deploying new fiber-optic cables. In addition to being home to a buzzing data center industry, Dublin is an attractive spot for targeted growth because of its cool, cloudy weather. Access to natural cooling is a boon for companies interested in offsetting their monthly temperature control costs.

Several factors make Ireland an ideal spot for data centers
According to local industry initiative Host In Ireland, the advantages of building data centers in Ireland are not limited to Dublin. The entire nation enjoys digital business-friendly policies and tax incentives, as well as complete compliance with EU Data Protection requirements and has a positive attitude toward U.S./EU Safe Harbor legislation.

Ireland also boasts very tech-savvy local employees, making it easy to track down consultants with data center expertise while companies are operating abroad. The workforce in Ireland was also ranked among the top most educated in the world and leads the globe in flexibility, making the country a first-class spot for data center growth.

Natural cooling and electricity via wind power are key perks of building in Ireland.

Ongoing development means the Ireland boom won't be slowing soon
If the healthy development and reliable workforce of Ireland's data center industry aren't enough to convince companies to break ground over the Emerald Isles, then ongoing announcements of data center growth in the region should demonstrate that the trend is far from a fad. Storage firm EMC applied to construct new data centers in Ireland just last December, according to Data Center Dynamics. Likewise, tech industry leaders Yahoo and Equinix are currently making plans to build new data centers in Dublin, said the Irish Independent.

The article noted that the development of wind-generated renewable energy has been a big selling point for potential data center clients. Several U.S. corporations have already made moves to invest in Ireland's wind-energy infrastructure as a means of turning the country into an even more attractive location for data center growth.