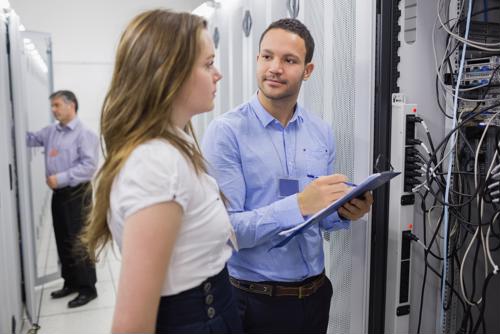 The struggle that IT decision-makers face with when meeting customer demands has never been more challenging. Surging demand for storage and other data center services has put pressure on companies to up the productivity of their network. According to Data Center Knowledge, data center managers are often asked to address these expectations and increase the delivery of the data center without making additions to the staff.

This catch-22 forces IT teams to think outside the box if they hope to maximize the performance of their current facility. On the bright side, there are several cost-effective options for solving common performance problems in the modern data center. The following tips are just a sample of the solutions at a data center manager's disposal.

"Managing device mesh is becoming more important than ever."

No relief in sight from the rapidly increasing need for storage
One of the best decisions an IT manager can make in terms of dealing with data center challenges is to acknowledge the scope of one of biggest obstacles. Demand for data center resources is not likely to die down anytime soon. In fact, the very opposite is true. According to Network​ World, the latest analysis performed by Gartner revealed that IT teams are faced with keeping up with a 35 percent annual growth rate in network bandwidth requirements. The study noted that nearly 40 billion terabytes of storage are used globally, with that total expected to surpass 89 million terabytes by 2019. Once an IT department accepts the reality of unrelenting demand for storage, then they can begin making plans that account for future scale.

The right gear is required to make sense of device mesh
The Gartner research also highlighted a phenomenon known as "device mesh," which describes the the increasing overlap of mobile devices, IoT, beacons and every other piece of technology that creates new sets of endpoints for accessing the company's network. Managing device mesh is becoming more important than ever as companies with data centers seek to streamline their facilities and services as much as possible. That's why data center management tools, along with serial console servers needed to connect and monitor a diverse set of devices, have become a go-to solution for IT decision-makers.

High turnover rate demands that IT managers extend trust to employees
One of the challenges of meeting the surge of demand for data center services is the fact that IT managers are often dealing with inconsistent resources and expertise. The data center industry ranks among the highest in the country for employee turnover. According to the Houston Chronicle, the U.S. Bureau of Labor statistics reported that turnover among the country's private employers hit 44 percent in 2013. There are plenty of ways to discourage turnover, and a stable team of employees working effectively together is a priceless commodity for any IT manager.

The best way to keep employees engaged and loyal is to establish trust. Meeting employees halfway and making tactical investments in their favor is one way to build up those relationships quickly. For instance, integrating remote console servers into the company data center would make it easier for employees to work out of the office. This kind of flexibility is prized highly by IT employees and could deter workers from looking for another job.

The right tools and solutions make short work of inefficiency in the data center.

IT teams must wrap their heads around the bimodal nature of IT
Last but not least, data center managers looking to meet the challenges of modern IT must communicate the right expectations to their staff. For instance, ZDNet noted that more firms are communicating bimodal expectations on modern IT to their employees to ensure that everyone is on the same page. Specifically, the data center exists both to protect the business and enable the business. The most cost-effective upgrades perform both duties, and defining this ideal to your employees will ensure the entire IT staff is working toward the same ideal.