PRINCETON, N.J. (Nov. 3, 2021) When the Ahr River, a tributary of the Rhine crested at 7m on the 14th of July 2021, 134 people lost their lives, and hundreds more were injured. With the destruction of roads, bridges, infrastructure, and homes, it was the worst flooding disaster in living memory for the people in the Ahr Valley, Rhineland-Palatinate, Germany.

Roland Beuge, an experienced First Responder, and local to the area, comments, “The devastation was unimaginable. People lost everything.”

Beuge quickly mobilized his Multi Technical Forces (MTF) team of volunteers to help in the response, recovery, and restoration process. They secured a 2500m² building to serve as a headquarters to house 20 on-site volunteers, craftsmen, and up to 100 displaced people who lost their homes. It is also the storage facility for distributing building materials. 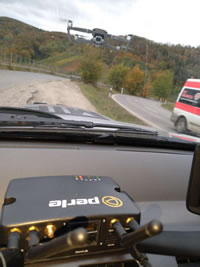 “We provide the basics like shelter, food, and supplies,” outlines Beuge. “We coordinate all of the volunteering tradespeople and take delivery of donated items. We recently took delivery of 24 tons of building material to facilitate the rebuild.”

Reliable communication and access to information form the basis for an efficient response and recovery operation. Beuge explains, “Our IT setup is far from sophisticated. Most people use their personal phones and laptops. We had purchased an LTE router with Wi-Fi but, it quickly failed. I realized I had two rather large issues. First, we needed to provide Wi-Fi coverage to the 120+ people at the headquarters so that they could access email, communicate with insurance companies, and stay in touch with friends and family. Second, I needed an LTE Router that could travel with us in our Disaster Recovery Vehicle so we would stay connected to headquarters, and the internet, while we deliver supplies to the most cut-off areas. I approached Perle for help and they donated an IRG5500 LTE Wi-Fi Router.”

The IRG5500 LTE Router uses two T-Mobile unlimited SIM cards. At headquarters, it is deployed as an "all-in-one" solution. This single box functions as an LTE Router, a four-port 10/100/1000 Ethernet Switch, and Wi-Fi Access Point.

With local roads severely damaged and impassable after the floods, delivering supplies to the most cut-off areas is only possible by Disaster Recovery Vehicle or quadbike. Ruggedized with shock and vibration resistance certifications, and a die-cast aluminium IP54 enclosure for dust and water ingress, the IRG5500 LTE Router serves as the main connectivity hub in creating a Vehicle Area Network (VAN). GNSS, included by default, enables real-time location tracking and real-time network clock updates for the router and any attached equipment. In-vehicle telemetry, sensors, and other devices are connected to transmit data to headquarters over LTE. While in the flood zones the Wi-Fi is used to provide free internet access to volunteers, recovery personnel, and homeowners in the area.

And, the built-in battery charge protection, with no requirement for external power conditioning, safeguards vehicle operation. The IRG5500 LTE Routers are designed to operate on limited power sources by consuming less than 1 Watt in idle mode and 53 mW in standby mode.

John Feeney, COO at Perle Systems comments, “Perle is happy to offer support and aid in the important work MTF carries out. First responders and field personnel need access to data and connected technology in and around their vehicles to enhance safety and responsiveness. The IRG Routers were specifically designed with this application in mind.”

While much progress has been made, life has not yet returned to normal. When Frank-Walter Steinmeier, Germany’s Federal President, visited the Ahr-Valley on October 10th, he commented,“There is a lot of work left to do before the rebuild is complete” 1

“Many aid organizations have moved on to other projects but MTF’s volunteers will continue to support the people of the Ahr Valley until at least the end of 2021,” comments Beuge. “For us to coordinate our resources most effectively, we continue to rely on the IRG5500 as our connectivity point. We appreciate the support Perle has provided.”

First Responders with many years of experience in international crisis areas including the Lothar hurricane 1999, Elbe flood 2002, Pfunds floods 2005, Cyclone Kyrill 2007, Haiti earthquake 2010, and Spanish Pyrenees forest fires 2012. Our path is human, not political, and we often arrive before official aid organizations.