RS232 to Ethernet Converters connect devices with RS232 serial interfaces to a local area network for transmission of serial data over wired or wireless Ethernet. By converting RS232 data signals into Ethernet (TCP or UDP) packets, and vice versa, they enable reliable data transmission to other devices or network server applications. This is accomplished by encapsulating the RS232 data in Ethernet packets in a manner that best fits the type of data being transported.

RS232 to Ethernet Converters have a physical wired or wireless (LTE or WiFi) network connection on one side, and one or more RS232 serial ports on the other side. They are designed to ensure that when you access attached devices over a network the connection operates as if you are locally connected to the RS232 port with a direct cable connection. This is perfect for M2M communication where client access needs to be made independent of any operating system or proprietary protocol. While some RS232 to Ethernet Converters can be very simple devices, it is best practice to use one with advanced security functionality, data encryption, and user authentication to ensure network data transmissions, and access to network equipment is protected.

Talk to an Expert

Perle offers multiple form-factors to match the RS232 to Ethernet communication specifications of your equipment such as the right connector type, control signal, flow control, baud-rate, and data throughput performance. Regardless of the form factor you choose, all IOLAN RS232 to Ethernet Converters come with high-performance software functionality and are IPv6 compatible.

Installing a RS232 to Ethernet Converter is ideal if you need to:

Secure access to USB or RJ45 RS232 console ports on routers, switches, etc, via inband Reverse Telnet / SSL / SSH or out-of-band over integrated LTE, WiFi, or modem for multiple alternate access methods when the network is down. Out-of-Band Management: What is it and why do I need it?

For use with UDP based applications, Perle IOLANs can convert serial data for transport across UDP packets either on a point-to-point basis or shared across multiple devices.

Serial ports can be connected to network servers or workstations running Perle's TruePort software operating as a virtual COM port. Sessions can be initiated either from the Perle IOLAN or from the TruePort COMport Re-director Utility.

Remove dial-up modems and instead connect to remote serial equipment across an Ethernet network while still using the AT command set. Learn more about IOLAN Vmodem technology. 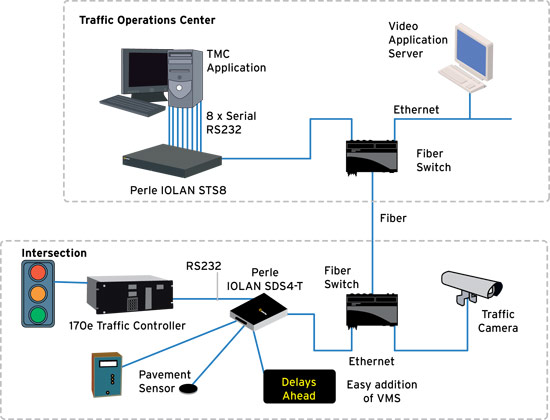 Custom Packet Forwarding allows the user to define the packet forwarding rules based on the packet definition or the frame definition.

Send data across the network to a SCADA system so personnel, on and offshore, are able to monitor and control the output of oil pumps.

Companies that use Perle IOLAN RS232 to Ethernet Converters

Why Choose a Perle RS232 to Ethernet Converter?

TrueSerial® is an innovative approach that delivers the most authentic serial connection across an Ethernet network. And, Perle IOLAN’s are built with the fastest processors for high-speed serial data throughput.

Because Ethernet cable is inexpensive and commonly available, some users prefer to use straighthrough cabling for their serial equipment connections. Perle IOLAN RS232 to Ethernet Converters with RJ45, DB9, or DB25 adapters make this possible for half-duplex and full-duplex connections. Click here for more cabling pinout details.

Perle Device Servers are made from certified components with high MTBF rates that can withstand the harshest environments. An open source platform and enterprise grade security ensures you have the best value in one box. In addition, we provide the best-in-class Lifetime Warranty.

Perle has been providing reliable device connectivity solutions since 1976. That’s over 40 years of experience that businesses around the globe have come to trust to deliver superior connectivity technology for mission critical applications. If network uptime is vitally important to your success, choose quality products. Choose Perle.

If you need a technical consultation (by phone or email) to help you choose the best Device Server for your application, Perle is easy to reach and has technical engineers you can talk to. We have sales and technical support staff around the globe to support you when you need it.

Originally called RS232, the standard was developed in the 1960's to specify the electrical signalling between a communications device and the computer it is attached to. As the standards body made revisions to the standard, and the EIA merged with the TIA, the name changed. EIA/TIA232 is the most recent and correct name however, RS232 is the most commonly used name. Ultimately they all refer to the same standard to define the interface between Data Terminal Equipment (DTE) and Data Circuit Terminating Equipment (DCE) employing serial binary data interchange.

While the standard does not define a maximum cable length, a widely used rule of thumb indicates that RS232 cables should be limited to 15 m (50 ft). An RS232 to Ethernet Converter is ideal when users want to replace RS232 serial cabling with Ethernet but maintain the use of devices that were active on the serial network. Ethernet cabling is generally run up to 100m (328ft).

Flow control on the IOLAN RS232 to Ethernet converter is accomplished through the use of software Xon/Xoff flow control, as well as hardware flow control with RTS and CTS signaling between DTE and DCE.

As a DTE, the IOLAN presents DTR and RTS signals on its RS232 port(s). This is straightfoward when communicating directly with a modem or modem emulating DCE device. However, when connecting to another DTE device or when using RJ45 CAT5 cabling schemes, a crossover cable or converter is required. IOLAN cable accessories are available to assist with these connections.

Asynchronous RS232 baud rates typically range from 50K baud to 230K baud with some devices operating at speeds as high as 500K baud. While most RS232 to Ethernet converters on the market offer a limited selection of baud rates for communicating, the Perle IOLAN supports the full typical baud rate range and also offers customizable baud rates for those RS232 devices that require unique baud rates.