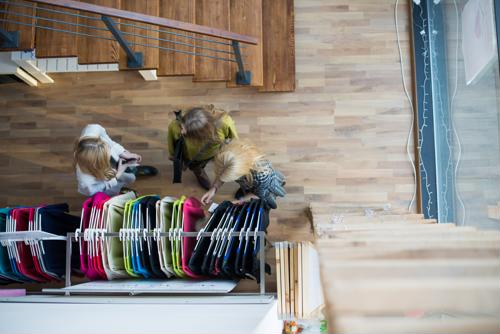 Brick-and-mortar retailers have been locked in a losing battle with e-commerce companies for more than a decade. Online sellers such as Amazon leverage robust purchasing services and state-of-the-art logistics technology to streamline the shopping experience, drawing consumers out of stores and into web-based marketplaces. Traditional merchants counter with special sales initiatives and in-store promotions but these activities have little effect.

Still, there is hope for these beleaguered sellers. In recent years, innovators in the retail space have introduced new technologies designed to enrich the physical shopping experience and lure customers away from their screens. Forward-thinking retailers have been quick to adopt these tools to drum up new business and fend off elimination. And, surprisingly, this sector-wide shift may be working.

The store redefined
Before the rise of e-commerce, physical retail locations attracted crowds with fully-stocked shelves, knowledgeable staff and the occasional sale. Of course, Amazon and others have essentially rendered these stores useless. As a result, some brands have attempted to modernize their brick-and-mortar shops, rejiggering them to emphasize experience and promote brand-based discovery. Samsung did just this in February, opening a Manhattan flagship location, called Samsung 837, that allows customers to explore its product portfolio without worrying over transactions, according to a company press release.

"At Samsung, we have a proven track record of innovation, and with Samsung 837, we are creating the flagship of the future," Zach Overton, vice president and general manager for the location, explained. "Reimagining the traditional store experience, 837 is a fully immersive cultural center, featuring programming which will tap into people's passions such art, music, entertainment, sports, wellness, culinary, technology and fashion, all powered and enriched by technology."

Indeed, the 55,000-square-foot store does boast myriad interactive features, including a virtual reality tunnel lined ceiling to floor with 4-D displays, a lounge area featuring cutting-edge home entertainment equipment and a central presentation space that boasts the world's largest LCD display. The electronic giant also partnered with Brooklyn eatery Smorgasburg to provide Samsung 837 customers with gourmet food and drink. To top it all off, the shop includes only one point-of-sale and minimum sales staff, allowing customers to wander aimlessly and hold off on making purchasing decisions.

In pioneering this physical retail format, Samsung hopes to move brick-and-mortar selling forward while also giving consumers the ability to truly experience products before swiping their credit cards. However, others caught on to this developing trend long before Samsung entered the fray. For instance, the fashion retailer Tommy Hilfiger introduced VR headsets in its Manhattan boutique last year, The New York Times reported. Customers who come to the store can now strap on the devices and take in a virtual fashion show featuring the label's latest ready-to-wear products.

So far, these in-store innovations have proven successful, a circumstance that will no doubt lead others to test out the technology-infused experiential retail model.

The traditional in-store experience no longer cuts it into today's data-driven world.

Robots in the aisles
Some sellers are taking a more scaled-back, yet equally ambitious approach to enriching their physical locations. The Internet of Things has produced myriad new technologies, including drones and other intelligent devices with processing power to automate once time-consuming activities. These devices have been largely relegated to the private realm, deployed by at-home technology enthusiasts. However, many businesses, including retailers, are now using them to streamline their processes.

In May, Target demoed an autonomous rolling robot at a store in San Francisco, Fortune reported. The seller partnered with the Silicon Valley startup Simbe Robotics to create Tally, an inventory control robot capable detecting misplaced or unstocked items. Lowes debuted a slightly more advanced automated device in August, according to a company press release. Called the LoweBot, the machine not only conducts inventory control, but also offers advice to customers in need of assistance.

Engineers at the gardening chain's Innovation Lab worked with Fellow Robots to create the device, a variant of the NAVii robot that includes face-recognition software and has multilingual voice recognition and response capabilities. Executives at Lowe's believe it will drastically improve store operational efficiency and save customers and employees precious time.

"We designed the NAVii robot to make the shopping experience easier for consumers - simplifying the process of finding the product you're looking for - while also managing the back-end and keeping shelf inventory up-to-date for the retailer," Marco Mascorro, CEO for Fellow Robots, explained in the release. "Leaving the data and simple recommendations to NAVii allows Lowe's employees to devote their attention to the Lowe's customer, to provide them with thoughtful advice and personalized service."

Currently, LoweBot exclusively roams the aisles at Orchard Supply Hardware, a Lowe's subsidiary in San Jose, California. However, retail analysts expect Lowe's to let the robot loose in locations across the country in the near future.

Automated technology has also found its way into warehouses and other back-of-house facilities. In 2014, Target doubled down on its commitment to robots by constructing a warehouse in Wilmington, Massachusetts, run entirely by these devices, The Wall Street Journal reported. Technicians staff the location to keep in eye on things but automated packing machines to do most of the work. Intelligent carts roll through aisles and pick out products, delivering the items to robotic arms that carefully pack and wrap them. Even malfunctioning robots can survive without human interference, as they are designed to remove themselves from production areas and remotely alert on-site personnel.

Ultimately, these behind-the-scenes machines may drive more change than their customer-facing cousins, allowing brick-and-mortar shops to facilitate nimble, fast-moving supply chains that can keep up with the expectations of modern consumers.

"As traditional merchants look for ways to modernize their physical operations, they also work to streamline and improve existing web-based purchasing portals."

Chatting it up
As traditional merchants look for ways to modernize their physical operations, they also work to streamline and improve existing web-based purchasing portals. Over the last year, many have turned to a curious software innovation for help in this area: the chatbot. These pieces of software leverage artificial intelligence technology to converse with human customers via common chat platforms like Facebook Messenger and Slack, The Washington Post reported.

When communicating with retail chatbots, shoppers can ask for recommendations, configure store account settings and order products - all without leaving the messaging window. Additionally, most of these digital assistants are engineered to communicate like modern customers, meaning they understand slang and use the occasional emoji.

"The web or the app world, they forced humans to behave like computers," said Beerud Sheth, CEO for the bot-maker Gupshup, told The Post. "In messaging, computers have to behave like humans."

Chatbots and in-store technologies have only begun transforming brick-and-mortar retailers into modern enterprises strong enough to withstand changing consumer habits and other trends. Perle has long supported traditional merchants, providing brands like Adidas and Tesco with media converters, service terminal servers and other innovate digital infrastructure capable of improving the customer experience at point of sale and streamlining warehouse operations. For more information about our efforts in the retail arena, contact us today.